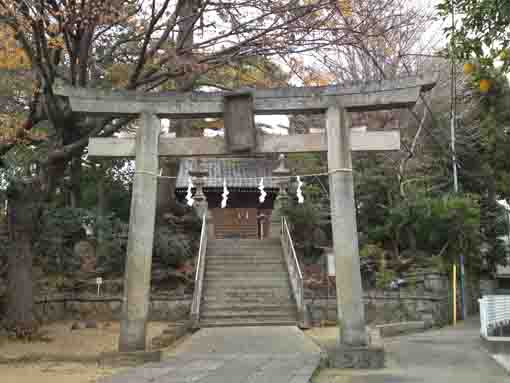 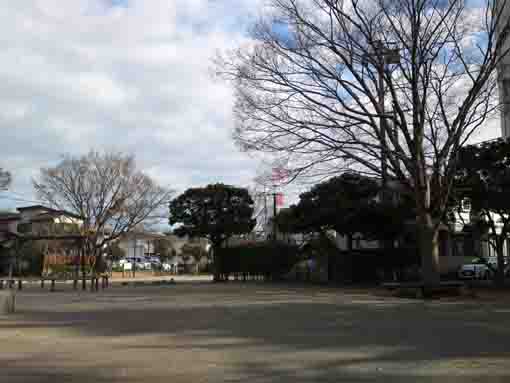 Katsumata Jinja and Katsumata Park are important landmarks to tell the history of Katsushika county. They are a small shrine and a small park on along the Route 14th or Chiba Kaido in Nishifunabashi Funabashi city, but they were very famous noted spots appeared on guide books published in Edo period such as 'Edo Meisho Zue', 'Kasushika Shiryaku' and 'Shimousa Jinjako'. Moreover, Katsushika Jinaja had been called Katsushika Myojin that was the guardian deity of this area. And Katsumata Park is on the remains of Katsumata no Ike pond that was writen in some poems since the Myriad of Leaves edited. They are good places to see the history of Katsushika. Why don't you visit them?
page top 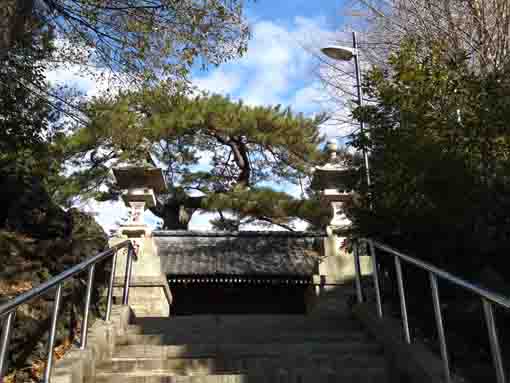 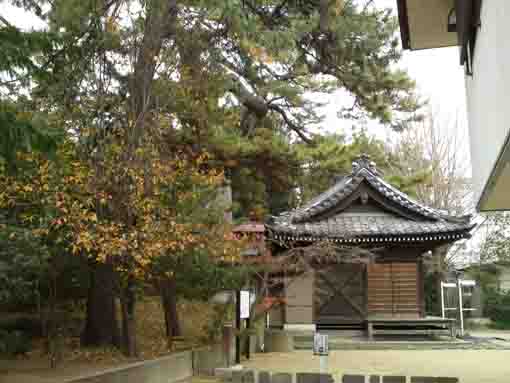 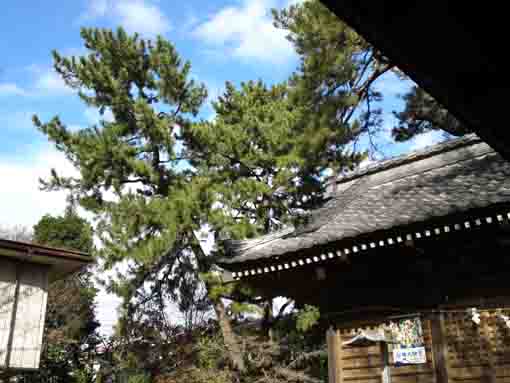 This shrine is the main shrine of Katsushika County called Katsushika Jinja Shrine.
Ninigi no Mikoto, Hiko Hohodemi no Mikoto and Kumano Oogami are dedicated in.

The History
Katsushika Jinja, the principle shrine of Katsushika county standing on a small hill beside the beautiful scenic spots in Edo period called Katsumata no Ike pond (now Katsumata Park) was moved here in January 13th of 1916. Before moving, there was a Kumano Gongen Jinja standing and the gods have been dedicated together. Katushika Jinja was originally called Katsushika Myojin when it stood beside Kazura no I well in 6 chome Nishifuna.
People living near this shrine deeply believed in it.

The Festivals are held in October 14th and 15th.

The owner of them are Katsushika Jinja Shrine
The black pine tree standing in front of the main hall of this shrine. This tree has two large blanches and they glow higher like an umbrella covering on the hall. It looks like a part of the hall, so they create the beautiful view. The black pine tree is about 13 meters tall, 3.42 meters long around the trunk, and the blanches spread 16.5 meters wide so it has the thickest trunk in the city (measured in March of 2011). Black pine trees spread throughout the main, shikoku and kyushu island in general. Sometimes it is called 'omatsu'.
Katsushika Jinja Shrine stands the west side of Katsumata park (there was a pond called Katsumata no Ike several decades ago.) The pond had been named after Katsumata no Ike pond near Toshodaiji and Yakushiji Temple in Nara, so it was written in Myriad of Leaves and some tanka poems. It was introduced in Katsushikaki, a guide book describing Katsushika county published in 1749, so the pond was one of the famous scenic landmarks in Shimousa. By a picture of Katsumata no Ike Pond by Settan Hasegawa on Edo Meishozue, a guide book describing noted spots in Edo published in 1836, there was Kumano Jinja Shrine and some pine trees. Katsushika Jinja was on the west of Kazura noI well, but the god of the shrine came to be dedicated with the god of Kumano Jinja in 1914 and it moved here in 1916, then it became the guardian deity of Katsushika village and it was named Katushika Jinja.
Anyway, black pine trees in Katsushika Jinja Shrine have been known to people since Edo period.
Now Katsumata no Ike Pond was filled up in 1940's and Katsumata Park was opened. 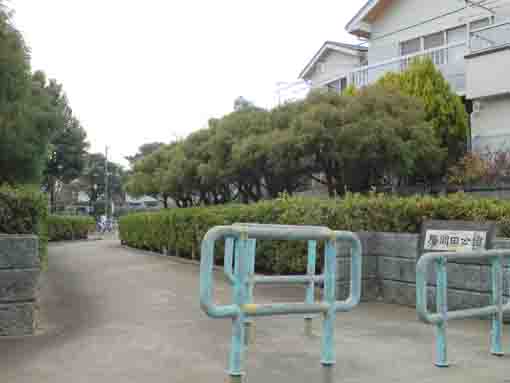 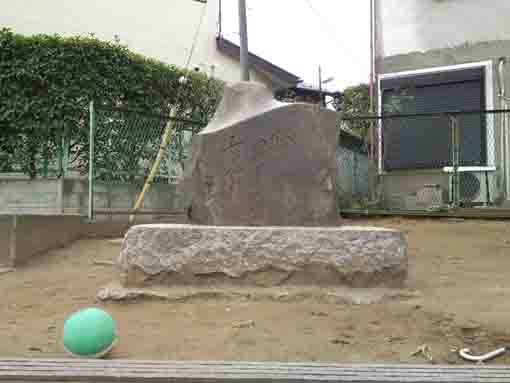 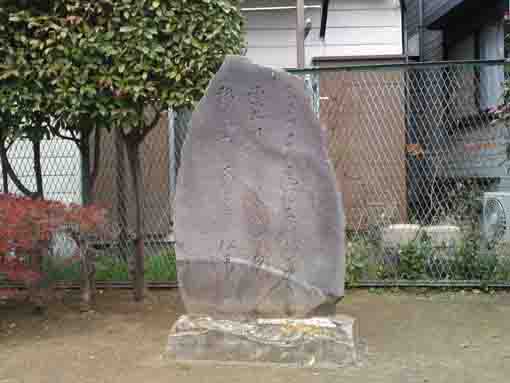 Katsumata Park is opend on the remains of Katsumata no Ike Pond that was one of the most famous noted spots in Katsushika had been written in many poems since the Myriad of Leaves had edited. According to the signboard in Katsushika Jinja Shrine standing on the west of the park, the pond was named after Katsumata no Ike pond near Toshodaiji and Yakushiji Temple in Nara Prefecture. Katsushika Shiryaku (a short history book of Katsushika county) tells ' this pond has been an old noted spot in Shomousa Province but the pond that was written in the Myriad of Leaves was not this pond.' Morover, Edo Meisho Zue (the noted spots in Edo) tells that the poems in Yakumo Misho, Norikanekyo Godaishu and Ruiji Meisho Wakashu could write this pond here. And it also says that there were Katsumata no Ike ponds in Okayama prefecture.
Many poems have written Katsumata no Ike pond, now it becomes a park that children plays in. However, there are two stone tablets in it and tanka poems are scribed on each of them.

The peoms belows are telling of Katsumata no Ike.

The Prince Nittabe in the Myriad of Leaves

The Mother of the Emperor Nijo, Higo in Senzaishu

The Location and Access to Katsushika Jinja and Katsumata Park