Yawata no Yabushirazu | The Mazelike Thicket at Yawata 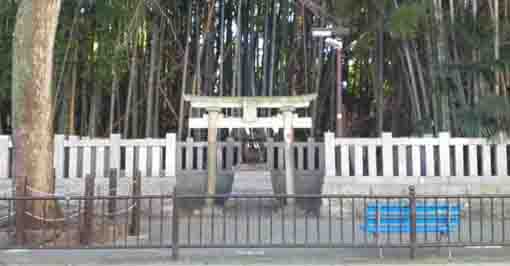 There are a small shrine and a torii gate with the letters of 'Yawata Shirazu no Mori' on a framed writing in a small bamboo thicket opposite the city hall of Ichikawa City. This is Yawata no Yabushirazu (the mazelike thicket at Yawata) or Yawata Shirazu no Mori (the Forest People Living in Yawata Unperceiving). There are no adequate records when this woods has existed and when it began to be called 'Yawata no Yabushirazu', so some legends and stories have been told. According to Edo Meisho Zue (a guide book describing Edo in Edo period) and some guide books, one who enter into the thicket by mistake must incur a divine wrath, so it has been a famous spot since Edo period. And there was a tea stall opened there. So some books in Edo period introduce the woods as a noted spot. Moreover, Yawata no Yabushirazu is described in both Kojien and Daijirin, popular Japanese dictionaries, the great writers such as Soseki Natsume, Ryunosuke Akutagawa, Ranpo Edogawa and Yukio Mishima used Yawata no Yabushirazu as an idiom that describes 'a mazelike thicket', 'without end or without exit' and 'pointless'. And Sachio Ito, Kyoka Izumi, Yasuo Uchida, Ranpo Edogawa, Kyoshi Takahama, Kafu Nagai and Soseki Natsume introduced in their masterpieces.
Anyway, when Mito Komon had heard the story of Hachimon Tonko no Jutsu, he was very interested in Yawata no Yabushirazu, so he visited Yawata and entered into Yabushirazu, finally he got lost in real. According to the legend of Ichikawa, Komon met an old man with gray hair and told him the way to go out.
Even now Yawata no Yabushirazu is very important forest as a precious green land where tall buildings stand. The forest called Yawata no Yabushirazu is an important asset of Katsushika Hachimangu Shrine and the sign board of the shrine tells that the thicket is designated as the Reserved Forest by the National Government. Yawata no Yabushirazu, the tiny forest, in the central part of Ichikawa City is preserved with many legends.
Anyway, Yawata no Yabushirazu, Senbon Icho Gingko Tree and the Stone Yoritomo's Horse Held were counted as three mysterious spots in Yawata.

In the page 'The Mysterious Spots', some spots having some mysterious and wonderful stories are introduced. Please see the page.
page top

The Reasons for Not Entering into Yawata no Yabushirazu

Yawata no Yabushirazu (the mazelike thicket at Yawata)

The Map to Yawata no Yabushirazu

PDF of the Map to Yawata no Yabushirazu

The map of the noted spots near Yawata no Yabushirazu

Visit Landmarks near Yawata no Yabushirazu