The Ferry at Sakasai / the Biginning of Sakura Michi Road 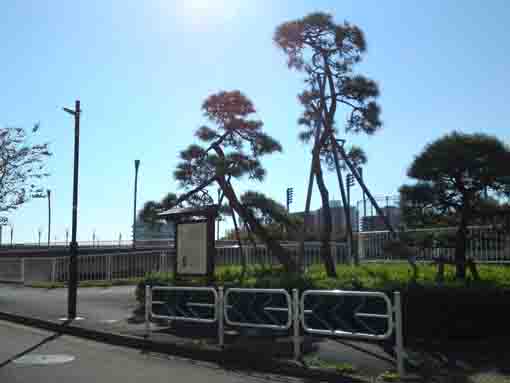 Sakasai no Watashi ato is the remains of the ferry used in Edo Period that is now standing under the 7th Highway (Komatsugawa Line) and on both east and west sides of Kyu Nakagawa (the old Nakagawa River). They are historical sites, one of it in west stands on Kameido in Kotoku and another one is on Komatsugawa in Edogawaku. There has been no specific information when it had been opened, but the signboard standing on both remanis tell it carried people early Edo Period. The ferry had the starting point of Sakura Michi Road to go to Boso Peninsula. It had carried many people when a bridge and a railway from Honjo (Kinshicho in Tokyo) to Naruto in Chiba called Sobu Line were built in 1894. Now no one knows there was the ferry. On the south of the remains, there is a large green open space named Ojima Komatsugawa Park opened on between Arakawa and Kyu Nakagawa River. In spring, it is called Komatsugawa Senbon (a thousand) Sakura since there are millions of sakura blossoms blooming in the park and on the banks of the rivers. In fall, many zelkova trees along Kyu Nakagawa River paint the views of the park beautifully. visitors could find some historic information and enjoy seeing fine view around the remains of the ferry at Sakasai. Why don't you visit Sakasai no Watashi Ato?
page top

The Remains of the Ferry at Sakasai

The Remain of the Ferry at Sakasai

It is registered as a municiple historic site by Kotoku.
The ferry at Sakasai had opened on Nakagawa River from Edo period to the early Meiji era, it had brought people from Kameido Village on the west bank to Nishi Komatsugawa on the east. Originally, it worked on between Sakasai Village on the north of Nishi Komatsugawa and Kameido, then, it was called the Ferry at Sakasai. Sakasai is a juncture of Sakura Michi Road running along the north bank of Tatekawa Canal built in 1659 and Nakagawa River and it was an important place to go to Shimousa from Edo. According to Shinpen Musashikoku Fudokiko (a geography book of Musashi province in Edo period), the river was 75 meters wide, and two boats were prepared, one was owned by Kameid0 and another one was Nishi Komatsugawa Village.
There is no specific information of the beginning of the ferry. An old book, Edo Hogakuanzu, published in 1680 tells the ferry at Komatsugawa and it was on the juncture of Soshu Sakura Kaido (Sakura Michi Road) and Nakagawa River. It implies that it had been at that time. Moreover, a record in Meiji Era, the ferry was opened in Kanbun Era (1661 - 73) by Heiuemon Tokushimaya who built Tatekawa Canal.
Ehon Edo Miyage (pictures book of Edo) published in 1850 shows the views around the ferry that many people of refined cultural tastes loved the areas around the ferry where a green rural landscape such as rice fields and woods spread all over. It tells people enjoyed seeing the views from the ferryboats.
The ferry existed in Meiji Era. According to the data recorded by Tokyo, the fare to one person was 1 rin 5mou, it for a horse, a bull or a jinrikisha (a cart that a man drawing) was 3 rin, and a cart was 1 sen 5 rin. In 1879, the ferry was closed after a bridge built on between Kameido Village and Nishi Komatsugawa Village.
December 2013平成２５年１２月
Kotoku Board of Education


The Remains of the Ferry at Sakasai

The ferry at Sakasai on Nakagawa River appears on Shinpen Musashi Fudokikou and it tells that the ferry was called the ferry at Sakasai since it had been in Sakasai Village before, so originally it had been Sakasai on the north of Nishi Komatsugawa Village and it moved here (near Sakasai Bridge) since a road to Boso areas has been opened. This road had been called Moto Sakura Micho Road. It went through the land of Edogawaku to go to the northeast, then it went across Edogawa River to pass Ichikawa and Sakura, then, it finally reached at Narita. It has been called Chiba Kaido Road since Meiji Era.
Hiroshige Ando painted a picture of the landscape around the ferry at Sakasai in his works called Meisho Edo Hyakkei (the 100 noted spots in Edo). In 1879, the ferry was closed since a bridge was built on Nakagawa River. Both villages spent the construction fees, then, they wanted to get a toll when people passed the bridge. In 1897, it was rebuilt by Tokyo. In 1968, it changed to an iron bridge by Kotoku and Edogawaku. The areas along Kyu Nakagawa has been reconstructed, Niji no Ohashi, Momiji Ohashi and Sakura OhashiBridge were built.
Edogawaku

The Remains at the Ferry at Sakasai
page top