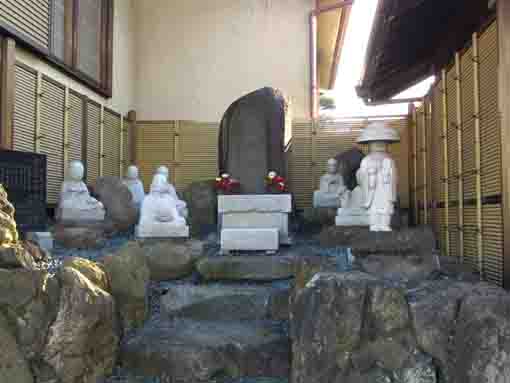 In Genki Era (1570 - 1573), there was a man named Yoshiro living in Horie village (now Horie in Urayasu). One day, Yoshiro's mother found a doll on a shore, she brought to her home and put it in her toy box. At that time, an epidemic spread through her village, and all Yoshiro's family members got sick in bed without him. Then he visited Yakushi Nyorai in Kine village in Shimousa to pray for recovering his family's health since the Yakushi Nyorai was very famous for its miracle power to cure disease. However, the chief priest at the temple told him that it was necessary for Yoshiro to visit this temple since he had a Yakushi Nyorai in his house. Then, he harried up to came back to his house and searched for it, finally he found a statue of Yakushi Nyorai on a turtle's back in the toy box. Yoshiro carefully dedicated it in his family Buddhist alter and he always chant and pray it, his family soon recovered from the epidemic.
Later, Yoshiro dedicated the Yakushi Nyorai to Iosan Togakuji Temple. The Yakushi Nyorai is carefully dedicated in the temple as its principle image even now. But it is not opened to public.