Udagawa House in Horie tells the History of Urayasu 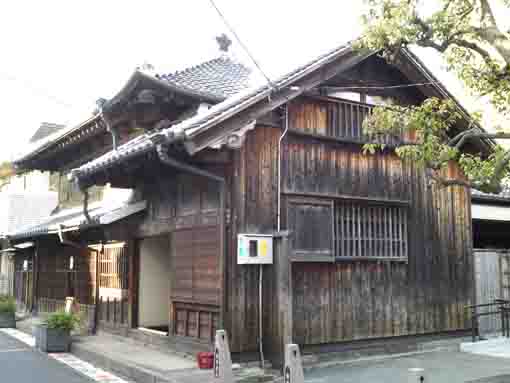 Udagawa House preserved in Horie, Urayasu-shi, Chiba-ken is an old wooden house registered as a cultural asset of the city. According to the guidepost by the house, it is the oldest house in the city that the date of construction was known, it was built in 1869. The owners of this house had been a branch family of the Udagawa Family who was had contributed to cultivate the lands the north shore of Tokyo Bay such as Urayasu, Kasai in Edogawaku and Sunamachi in Kotoku in Tokyo. The owner has another name Fujimuraya, so they had opened some business in it.
The origin of the Udagawa Family is said to be a descendant of Uesugi of Oogigayatsu. The guidepost says that the surname 'Udagawa' was named after a artificial sword called 'Udamaru'. And Shinpen Musashi no Kune Fudokiko, a geographic guidebook describing Musashi Province, tells that the first man who named Udagawa was Sadatsugu, a son of Tomomasa, a son of Mochitomo Uesughi of Oogigayatsu. Sadatugu first became a Buddhism monk, but he quit it and named Gouemon Udagawa, then he lived in Shinagawa (in Tokyo). Kiuemon, his son, moved to Komatsugawa (west part of Edogwaku) and he brought land under cultivation. These lands were named after him 'Uki Shinden'. Edo Bakufu praised him and gave the guarantee that he owned some of them. And he became a nanushi (a village head) and it had been succeeded by his descendants. In 1798, Izaemon Udagawa took care of the hawking by the Shogun in this area. Moreover, a guidepost in Dairenji tells that Rokubei Udagawa worked to support many people in Urayasu in late 19th century.
Udagawa House tells the history of Urayasu and the Tokyo Bay Areas. Why don't you visit it?

The Location and Access to Udagawa House in Urayasu