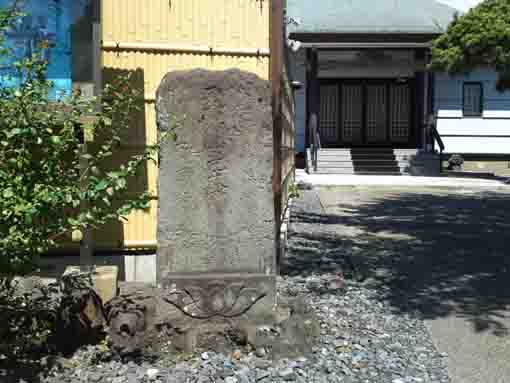 Going down the street to Edogawa River after getting off Tozai line at Baraki Nakayama Station, there are several old Japanese style residences that tells the area might be flourished with salt industry, and there is Kaichusan Ryogokuji Temple, the 11th temple of the 33 pilgrimage in Gyotoku and Urayasu in it.
In Edo Meisho Zue (a guide book describing Edo in Edo period), Ryogokuji Temple keeps 'Kagami no Miei' drawn by Enko Daishi himself and a toba bar with some letters written by the venerable Yuten, the 36th abbot of Shiba Zojoji Temple in Edo.
Why don't you visit Kaichusan Rogokuji Temple?
page top

Kaichusan Ryogokuji Temple is the noted temple that Edo Meisho Zue, Katsushikaki and Katsushikashiryaku describe. Though Koya area where Ryogokuji Temple stands is in the north shore of Edogawa Drainage Canal, it was in Gyotoku in Edo period and it was prosperous with salt industry.
Kaichusan Ryogokuji Temple was built by the chief priest Toei in 1691 as a branch temple of Joshoji Temple in Funabashi belonging to Jodo Sect. The Kaichusan implies the landscapes in Edo period that it faced to the sea since Kaichu means 'in the sea'.
According to Edo Misho Zue, Rogokuji Temple has a self-portrait called 'Kagami no Miei' drawn by Enko Daishi Honen and a toba bar with some letters written by the venerable Yuten, the 36th abbot of Shiba Zojoji, whom the 6th Shogun of Edo Bakufu, Yoshinobu Tokugawa, deeply believed. The principle image of it is the statue of Amidanyorai.
The self-portrait was given to Awanosuke by Enko Daishi. Awanosuke fallowed Enko Daishi to support him when he was exiled to Sanuki province (Kagawa prefecture). Awanosuke intended to study Buddhism after that, and he met Shinbei Isogai at Koya and stayed his house when went to the eastern Japan. Then they went around Japan together as their ascetic practices. During their journey, Awanosuke passed away and left the portrait. Then Shinbei brought it to Koya and he built a small shrine to dedicate it carefully as the principle image of it in the land where Ryogokuji Temple stands now.
Moreover, the venerable Yuten held the 550th anniversary of the venerable Honen at Ryogokuji Temple famous for the self-portrait of Honen, and he left his letters on the toba bar there. This toba bar is said to be very famous for having the divine favor to cure epidemics. Moreover, according to Katsushikashiryaku, the Shogun visited to see it.
Anyway, some said Ryogokuji Temple was built by the venerable Yuten in 1686.
Kaichusan Ryogokuji Temple is 11th temple of the 33 pilgrimage of Gyotoku and Urayasu.