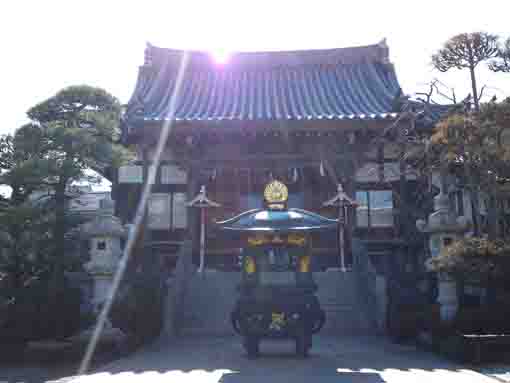 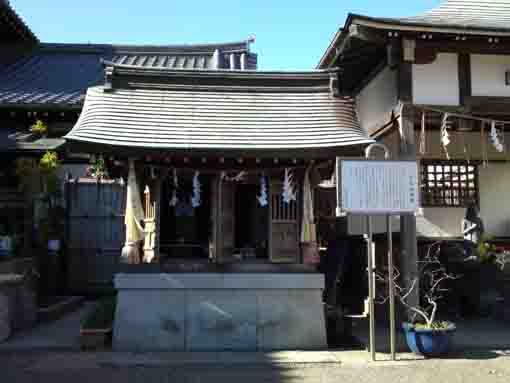 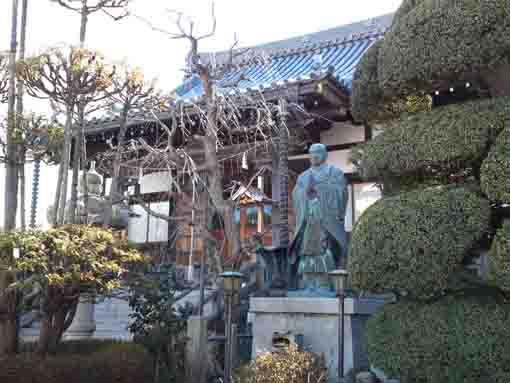 Once upon a time, there was a family called Shinabi in Horie village. Oneday, a master of the family found a Jisoson without its head in a burnt field when he went to Edo for his business. He promised to it to fix its head. Soon after he took it to his house and prayed for cure his skin disease, his skin recovered. Then he fixed it and dedicated it carefully.
Later, the Shinabi was adapted into Ikeda Family, and the Jizo was moved to the Ikeda's resident. In 1963, Nichiin, the 19th chief priest of Shofukuji Temple, built a shrine to dedicate the Jizo in the site as the resident was rebuilt.
Even now, many people who find the miracle power of Shinabi Jizo visit the temple and pray.

Febraury 2008
Urayasushi Board of Education

Jogyodo is a hall or a shrine where Jogyo Bosatsu is dedicated in.
This statue of Jogyo Bosatsu was dedicated by the venerable Kenmyoin Nisshin, the 17th chief priest, in March 1895.
Jogyo Bosatsu is one of the four Bosatsu such as Jogyo, Muhengyo, Jogyo and Anritsugyo Bosatu, who could save people and all living things in the end of the world where Buddhism would be declined and the world be corrupted. Jogyo means that one do everything clean.
This sculpture has been believed as an Arai Botoke, it means that one clean a part of the Bosatu's body to cure one's disease if one has it on the same part of one's body. It is popular among people and is called Jogyosama.
This Jogyodo shrine was rebuilt when the approach road to the main hall was fixed from 1992 to 1994.

January 2004
Urayasushi Board of Education