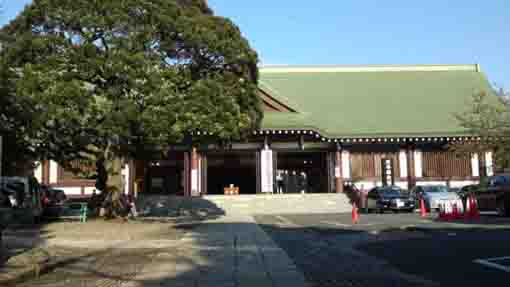 Kishimojin at Nakayama Hokekyoji Temple was counted as one of the three popular Kishimojin in Edo, it has been very popular since Edo period, it was introduced in Edo Meisho Zue (a guide book describing Edo in Edo period. And also Kishibojin is appeared on 'Goju no To' the masterpiece written by Rohan Koda (1867-1947) , it said, 'Though the divine favor of Kishibojin at Nakayama, I could grow up healthfully.''
Taikyaku-den(Hon-in) and Kishibo-jin-do stand on the northern side of the site. Taikyaku-den means Grand Guest House or Main Office, so it is the main office of Hokekyo-ji Temple, omamori (personal amulets) and go-shuin (red-seal) are given at the counter on the right side of the entrance hall.
And in Kishibo-jin-do, the statue of the goddess of kids, the Kisibo-jin carved by the founder Nichiren is dedicated. The statue of Kisibo-jin in Nakayama is worshipped very popular and is called as one of Edo Three Grand Kishibojin. Thousands of people visit and bless of safe delivery of a baby, healthy child rearing, curing disease, and rising prosperity of a company's fate.
The big roofed building is Taikyaku-den, KIshibo-jin-do is behind it. Taikyoku-den has long corridor connecting with Kishibo-jin-do. Left side of it, there is a kare-san-sui garden. In March, there display some hina dolls.
page top

Looking into the main hall of Taikyaku-den, the middle of the hall a big kumade (a rake of the cock fair) on the beam, there is a wooden three rooves pagoda on the left side of it. And an oil painting is on the left wall. The business office is on the right. 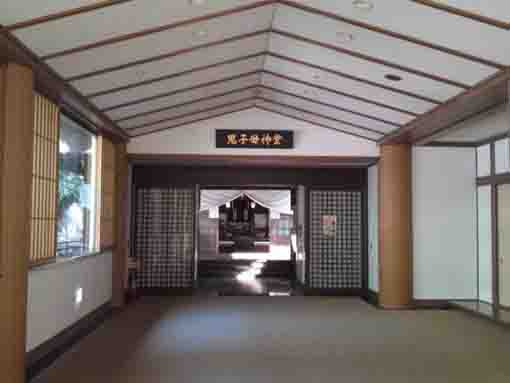 The corridor connecting to Kishibo-jin-do 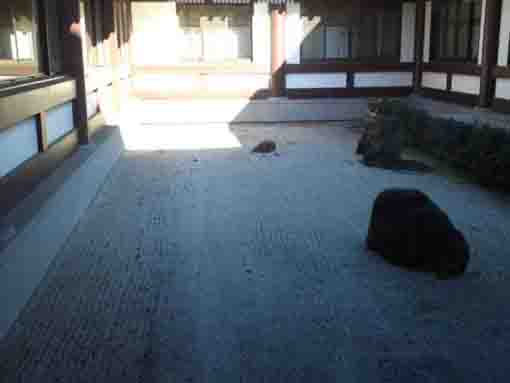 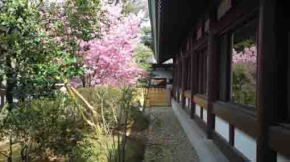 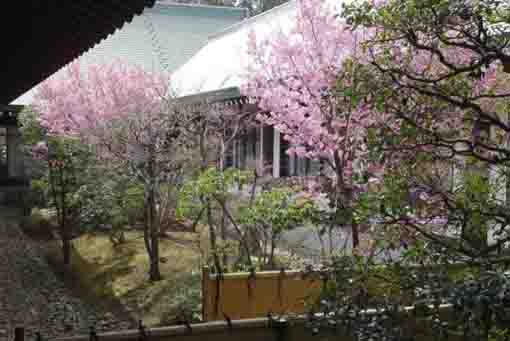 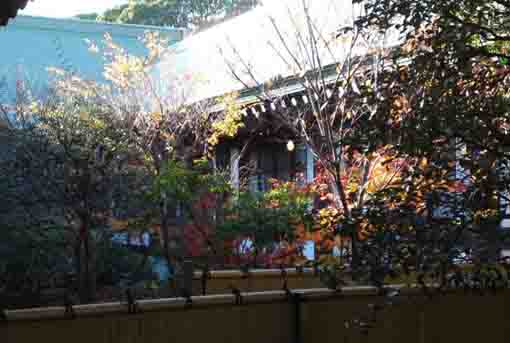 Many dolls are displayed on the corridor connecting to Kishibojin-do 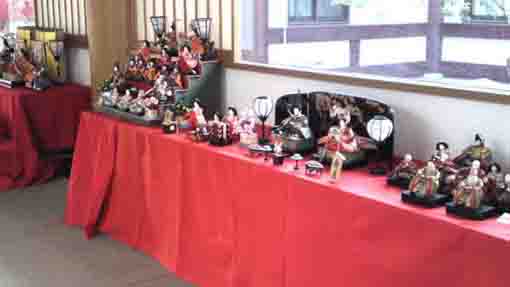 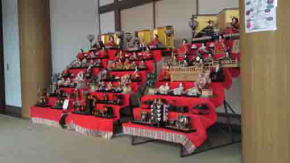 Kishibojin is a guardian goddess of Buddhism, and the goddess of childbirth and children. In general, the statue of Kishibojin is carved like a Tennyo (a celestial nymph) with a baby in her arm and a pomegranate in her hand. Kishibojin is a female devil called Hariti in Sanskrit. She was also called Kariteimo and Kankimo (a joyful mother).
According to a legend in Buddhism, Kishibojin was originally a daughter of Yasha (yaksa) and a female devil. She appeared at Rajagriba and ate over thousands of children in the period Buddha lived in the world. Buddha then hid a child whom she loved best, so he tried to lead her down the path of righteousness. She cried and cried, and searched her child throughout the world. But she couldn’t. She finally asked Buddha to help her. Buddha told her what she did wrong things. She got Gokai (the five commandments of Buddhism) and embraced the Buddhist faith. Kishbojin at last became the guardian goddess of childbirth and children
Kishibojin has been worshipped as the goddess of childbirth and children in Japan, sometimes she is worshipped to avoid thefts. However, she had been the goddess of producing at India before Buddhism adopted her in its ideas.
The style of her statue has two forms, one looks a Tennyo (a celestial nymph) and another one looks a female devil. the picture of Kariteimozou (Kishibojin) in Daigo-ji Temple in Kyoto has gentle and plump expression, it is a important historical asset shows the new trends that was influenced by Soga (Chinese painting). The great works of its statues are kept at Onjo-ji Temple in Shiga Prefecture and Todai-ji Temple in Nara.
The statue of Kisibojin dedicated at Hokekyo-ji Temple was carved by the founder Niciren. When he had been in trouble and been hurt on his brows in November 11th of 1264, Kishibojin appeared in front of him and helped him. He carved it to express his appreciation to Kishibojin while he was recuperating at Nakayama.. 引用・抜粋および参考
ブリタニカ国際大百科
明鏡国語辞典
デジタル大辞林
法華経寺ホームページ
市川市図書館ホームページ
五重塔 岩波文庫
page top

The Location and Access to the Main Hall and Kishimojindo Hall