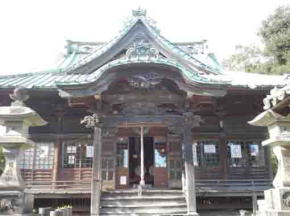 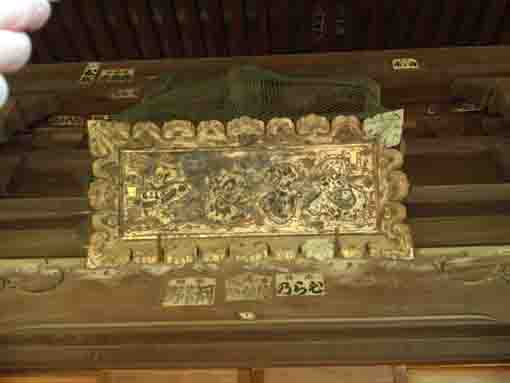 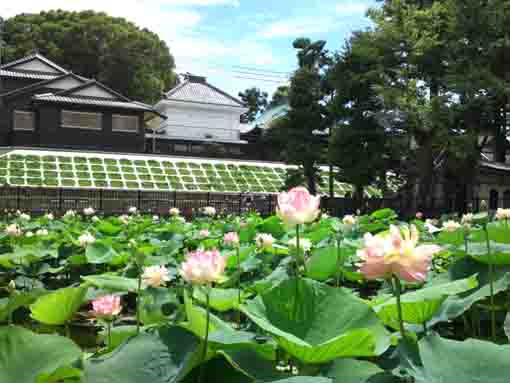 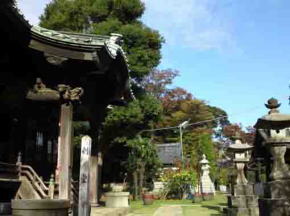 There is a small wooden hall like a hut standing on the small hill behind the Soshi-do is Setsudo hall of Nakayama Hokkekyoji Temple. Its sharp angled roof is so fascinated looked like a temple in the mountain side. The Setsudo is also called Kishimojindo Hall. The framed letters 'Kishimojin' on the front door was written by an Imperial Princess in Hokyoji Temple in Kyoto.
The Satsudo Hall was first built in Kamakura by Jingoro Hidari, one of the greatest craftman built Nikko Toshogu Shrine, and was moved to Nakayama in the regime of the third Shogun Iemitsu Tokugawa in early Edo period. And there is a very interesting legend, that says that the areas around Nakayama Hokekyoji Temple had never had droughts since it had a picture of a dragon in it.
Moreover, it dedicates Jurasetunyo, Kishimojin and Daikokuten to eliminate sins from people, so the day for visiting, the worshippers beat the drum for the day long. The day of Kinoe-ne-no-hi, the special practice faith healing is held there.
Visitors could see a wooden Edo Style building. Why don't you visit it? 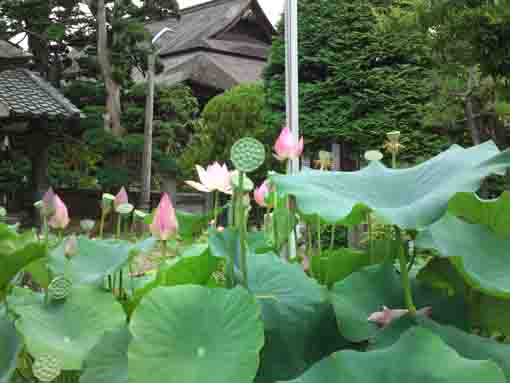 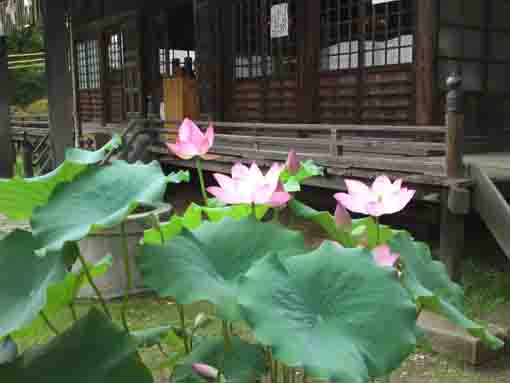 Jurasetsunyo means 'ten female devils', so they are the strong guards to protect the Lotus Sutra. They are Runba, Biranba, Kokushi, Keshi, Kokushi, Tahatsu, Muenzoku, Jiyoraku, Kotai and Dassaishujoshoge. They had drunk the human souls and spirits first, after they met Buddha with Kishibojini and listened his words, they became the goddess to guard the ascetic of Lotus Sutra. The model on the statue look generally Tennyo (celestial nymphs),never have drawn on the state of exasperation. They wears Chinese clothes or Japanese, and the accessories they have are disordered. They are appeared on the covers of Lotus Sutra like 'Heike-nokyo' and 'Senmen-hokekyo-sasshi'. And they are also drawn with 'Hugen-bosatsu (Samantabhadra)' in general.

Kishibojin is a guardian goddess of Buddhism, and the goddess of childbirth and children. In general, the statue of Kishibojin is carved like a Tennyo (a celestial nymph) with a baby in her arm and a pomegranate in her hand. Kishibojin is a female devil called Hariti in Sanskrit. She was also called Kariteimo and Kankimo (a joyful mother).
According to a legend in Buddhism, Kishibojin was originally a daughter of Yasha (yaksa) and a female devil. She appeared at Rajagriba and ate over thousands of children in the period Buddha lived in the world. Buddha then hid a child whom she loved best, so he tried to lead her down the path of righteousness. She cried and cried, and searched her child throughout the world. But she couldn’t. She finally asked Buddha to help her. Buddha told her what she did wrong things. She got Gokai (the five commandments of Buddhism) and embraced the Buddhist faith. Kishbojin at last became the guardian goddess of childbirth and children
Kishibojin has been worshipped as the goddess of childbirth and children in Japan, sometimes she is worshipped to avoid thefts. However, she had been the goddess of producing at India before Buddhism adopted her in its ideas.
The style of her statue has two forms, one looks a Tennyo (a celestial nymph) and another one looks a female devil. the picture of Kariteimozou (Kishibojin) in Daigo-ji Temple in Kyoto has gentle and plump expression, it is a important historical asset shows the new trends that was influenced by Soga (Chinese painting). The great works of its statues are kept at Onjo-ji Temple in Shiga Prefecture and Todai-ji Temple in Nara.
The statue of Kisibojin dedicated at Hokekyo-ji Temple was carved by the founder Niciren. When he had been in trouble and been hurt on his brows in November 11th of 1264, Kishibojin appeared in front of him and helped him. He carved it to express his appreciation to Kishibojin while he was recuperating at Nakayama..

Daikokuten is called Mahakala in Sanskrit.
Fundamentally, Daikokuten was the god of destroy. In esoteric Buddhism, he belongs to the north of the most outer court of Garbha-mandala, and he is a relative or a manifestation of Jizaiten (Mahesvara in Sanskrit) who has three black faces with angry appearances and six arms and the god of battle, protects Sanpo (three treasures) such as Butsu (Buddha), Ho (Sutras) and So (priests).Later Jizaiten changes to the god of eating and drinking, so Jizaiten is dedicated in kitchen.
First Saicho brought Daikokuten to Japan, and he dedicated at Mt.Hiei.
Daikokuten is a member of Shichifukujin (Seven gods of good fortune). He is described that he takes on a sack of rice with a headscarf on his head, mallet of good luck in his right hand, a big sack on his left shoulder. Daikoku is confused with Okuni who is the popular gods is dedicated at Izumo-Taisha Shrine. Since the middle ages, Daikokuten has been put the same god as Okuninushi, the faith to him is spread throughout Japan. Daikokuten is worshipped with Ebisu as the god of good fortune.
The statues of armed angry Daikokuten made in Fujiwara Period remains, the statue of Myoju-in at Shiga in the half-lotus position is one of those. But the general forms of them were dressed religious dresses with sacks on their backs. The statue at Kannon-ji Temple in Fukuoka Prefecture is a good example. After Kamakura Period, Daikokuten was always described as a member of the seven gods of good fortune like the statue at Seishuraigou-ji Temple in Shiga Prefecture. This style became the big trend and made a lot by Edo Period