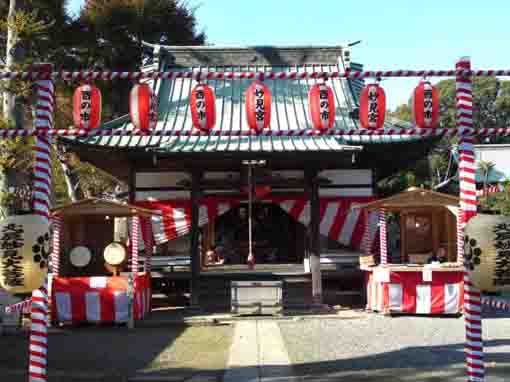 Looking at the northern ski at night, there is an immovable star. It is the polestar, and the star was deified with the god named 'Hokusin-myoken-daibosatsu'. Generally, it is very popular and affectionately called 'Myoken-san'.
In ancient China, people worshipped the sun, the moon and the stars as they could have mysterious power and virtue, so they observed them to govern their countries. And they thought that the Polestar is the king of heavenly bodies since the all heavenly bodies they could see traveled around the polestar as the center of the heaven, then they worshipped it deeply. This was the origin of Myoken Faith. Though Cinese called Polestar Hokushin, Japanese called it Hokushin-Myoken as it was associated with Myoken-bosatsu in Buddhism. As a result, Myouken is the name of Bosatsu, it is defied the Polestar and the Great Bear with the divinity. Myouken suggests Myoken-bosatsu, it is drawn on the center of the Hoshi mandala (the Star Mandala), it is seldom worshipped alone. It is sometimes called 'Sonnosei (the respectable king's star)' and 'Hokushin-Bosatsu'. And it is ofｔen confused with the Big Bear.
Myoken-Bosatsu has some miraculous virtues of protecting territories, avoiding fires, giving long lives, healthy childbirth, good matchmakings, recovering eye diseases, supporting poor people and fulfilling of wishes. Moreover,sinc some legends says the Great Bear is the sword to protect the lord of Heaven, it is believed that Myoken is the god of the fortune of war, so Masakado Taira, Kiyomasa Kato and so many bushos faithfully belived as a guardian god. In addition, the Esoteric Buddhism and in Nichiren Sect have Myoken-Bosatsu enshrined as the principle image to recover eyedisease with 'hokuto-ho (hokuto method)' and 'sonsei-ho (method of the respectable king's star) as skills of performing incantations.
The figures on statues and pictures of Myoken-Bosatsu have two or four arms, he rides on a dragon, and some have the Great Bear putting on the hands and others have the Great Bear painted on lotuses in them. Myoken-ko is organized the believers of Nichiren Sect who worship the Myoken-Bosatu.

According to Shinto, Hokushin-Myoken-Daibosatsu is called 'Ame-no-minakanusi'. It came to Japan, there had happened the syncretic fusion of Shintoism and Buddhism on it, and many Japanese put it very important religious position and believe it faithfully everywhere in Japan. Beside the sentence in Kojiki (Records of Ancient Matters) says 'When the heaven and the earth first appear on, the god whose name Ame-no-minakanusi-no-kami first appears on the world. This makes him fused with Hokushin-Myoken-Sonseio on the center of the heaven as the same god. The respectable King of Hokushin-Myoken is the divinity whose regular position is the center of the heaven, so it is admired that he is the respectable king of stars controlling all stars and gods, directions and ways, thus his power also influences among people's fate (stars). It was believed that Hkushin-Myoken-Sonseio is the god who holds power to protect all the stars and fate among the people since ancient ages.
This Hokushin-Myoken-Sonseio is the special god in the basic ideas of Taoism, Divination, Astrology, Feng Shui and the Way of Yin and Yang, so that he has the mighty power to manifest everything, Hokushin-Myoken-Sonseio is widely worshipped among common people faithfully.
page top

Nakayama-Tori-no-Ichi (The Cock Fair at Nakayama Hokekyo-ji Temple) is held at the Myoken-do next to the Soshi-do in Myouken-Sonsei-Taisai-no-hi, in other words, every Tori-no-hi (The Cock Day) in November. In the Myoken-do, Hokushin-Myoken-Sonsei is dedicated, he is the god of peace in the land, avoiding troubles and helping to get good fortune is introduced by the Chiba Clan.
According to Myoken-Hongu-Chiba-jinja Shrine Engi (the history of the shrine), Myoken had believed faithfully by the Chiba Clan from generation to generation. When the Founder Nichiren visited the Chiba-jinja Shrine and took an oath of developing and flourishing his religious sect, he got an auspicious augury, so he raised his voice in admiration and said 'The Myoken-Son is very the thing that the god protects my sect.' After his wish had been fulfilled, he dedicated the Lotus Sutra with thin letters written by him.
The Washi-Myoken dedicated at The Washi-jinja Shrine and Chokoku-ji Temple came from Hokushin-Myoken, the enshrine deity at the Chiba-jinja Shrine. And alos Yamatotakeru-no-mikoto dedicated at Aidono who became a swan and flew to Hokuten or Myoken's (the northen heaven) in myth. Therefore poeple think that their wishes get to them in Tori-no-hi.
According to Chokoku-ji Temple in Asakusa Tokyo, Myojo (Venus) started to travel and Washi-Myoken-Daibosatsu appeared, the Founder Nichiren had prayed for the peace of the country at Kobayakawa's residnt (there stands Shuzan-ji Temple) in Washizu, Kazusa-no-kuni (Mobara city, Chiba prefecture). The day is the Cock Day in November

Tori no ichi (The Cock Fair)

Sometimes Tori no ichi implies the market selling beautifully decorated KUMADE (bamboo rakes) like Asagao (morning glory) Fair, Hozuki (Chinese lantern plant) Fair and so on. Accoding to some dictionaries, Tori no ichi is a market opening at the festival of Ootori Jinja Shrine in every cock days in November, thus kumade might not be the main object of the festival. Now Ootori Jinja Shrines dedicate Yamato Takeru no Mikoto as the principle image, and the god was worshipped by sumurai worriers as he would be the god of good fortune in battle, and people living in Edo worshipped him as the god of good fortune in business and bringing good fortune. The shrines dedicate Ymato Takeru no Mikoto in Edo and areas around Edo has opened Tori no ichi (the cock fair). The beginning of selling Kumade started at a Ootori Jinja Shrine in Hanahata Adachi-ku Tokyo since KUMADE could scrape together a lot of gold, silver and treasures, so kumade became the principle lucky charm of the fair. And also according to some tradition, people would bigger kumades than they had bought them last year. Generally, the first cock day is called Ichi no Tori, the second is Ni no Tori and the third is San no Tori. The Tori no Ichi held in Ootori Jinja Shrine in Shitaya Tokyo is the most famous cock fair and several thousand people visit, so the shrine is faithfully called 'Otorisama' and 'Tori no Machi'. In tradition, some said that many fires will happen in the year that has San no Tori. It is because wives in Edo made this rumor to quit their husbands to go out at night to protect their families and houses from fires.
page top

Chiba Clan was a powerful family in Chiba-gun, Shimousa-no-kuni (Chiba city, Chiba prefecture).
There were two clans, one was the descendant of Chiba-kuni-no-miyakko, and another one was the descendant of Yoshihumi Taira of Kanmu Heishi. The Chiba Clan whose ancestor was Tsunekane of Heishi is the most famous. From late Heian period to early Kamakura period, Tunetane and Hirotsune Chiba helped Yoritomo Minamoto the founder of Kamakura Bakufu to join his army. Tsunetane was trusted by Yoritomo and appointed the Shimousa-no-kami (the Governor of Shimousa), and the descendants of him had been appointed it from generation to generation through Kamakura period, so they hold important positions in the Kamakura Shogunate and they had very influential power in Shimousa.
After the period of the Northern and Southern Dynasties, Chiba Clan had got influential power in Hizen-no-kuni (Saga prefecture).
At Kyotoku War in 1454, the Chiba Clan in Kanto region was divided, Tanenao led the head family and joined to the army of the Kanto Kanrei of Uesugi Clan, but Yasutane led the collateral family and joined to the army of the Koga Kubo (Koga shogun) of Nariuji Ashikaga. Finally, Yasutane won the war and overthrew the head family, then he succeeded it. However, Yasutane was defeated and killed by the army of Yoshimasa Ashikaga who was the eighth shogun of Muromachi Shogunate. Then his son, Suketane succeeded tne family, then he tried to build strong relation to the Koga shogun and moved the base from Chiba (Chiba city) to Sakura (Sakura city) to control Kokujin (samurais in his territory).
Late the Warring States Period of 1538, the Chiba Clan joined the army of Ujitsuna Hojo of Sagami-no-kuni (Kanagawa Prefecture) at the first battle of Konodai (Ichikawa city) to get close to him. Toshitane got married with a daughter of Ujiyasu Hojo, because Satomi Clan controlling Awa-no-kuni (the southern Chiba prefecture) gradually increased the power over Kazusa-no-kuni and Shimousa-no-kuni. Tanetomi, the grandson of Toshitane tried to strengthen his territory. After Kunitane, the son of Tanetomi,was killed his vassal suddenly. In 1585, Naoshige, the son of Ujimasa Hojo, succeeded the Chiba Clan. In 1590, it was ruined by Hideyoshi Toyotomi at the battle of Odawara in 1590.
The Soma Family in Iwaki-no-kuni (Fukushima prefecture) was a collateral family of the Chiba Clan.
The Chiba Family faithfully believed Nakayama Hokekyo-ji Temple and Nichiren Sect. Therefore temples and Nichiren Sect had had very influential religious power in the Boso peninsula since late Kamakura period. Sougen-ji Temple in Mobara city and Hondo-ji Temple in Matsudo city were very famous, too. And Nichiga, the fourteenth abbot of Myohon-ji Temple in Kyonan-cho, Awa-gun, Chiba prefecture wrote a dictionary 'Iroha-jisyo'. 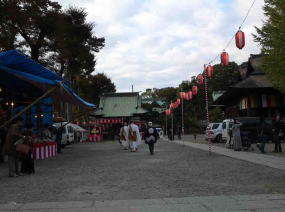 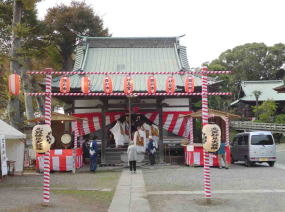 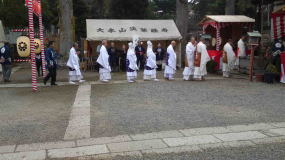 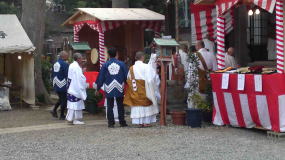 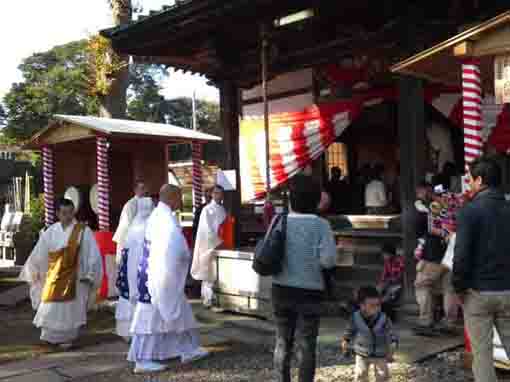 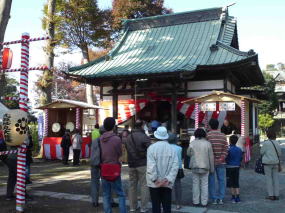