Kazura no I Well | the well related to Kafu Nagai 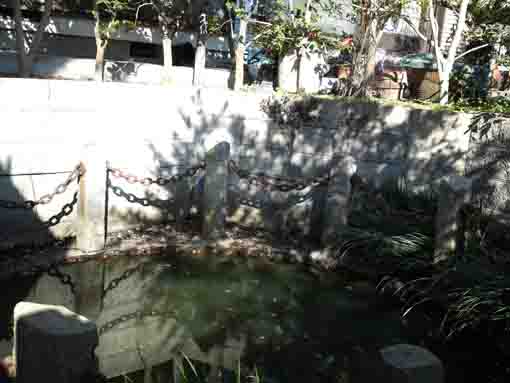 Kazura no I is a well is in a residential area in the western Funabashi City. There is a stone tablet scribing the name of the well under a large zelkova tree. Kazura no I Well is preserved since it is a municipal cultural asset of Funabashi City since it shows that this area has rich fresh water called 'Katsushika Yusui Gun (natural springs in Katsushika)', so Katsushika had rich water that Katsumata no Ike Pond on the south of the well appeared on the Myriad Leaves. And Futago Fuji no Ike Pond and Futagoura no Ike Pond in the area are also preserved. January 26th of 1947, a famous writer Kafu Nagai found the stone tablet in a bush, after that he visited it a few times and introduced it in his essay. And some guide books published in Edo period such as Katsushika Shiryaku and Edo Meisho Zue introduced it, and Edo Meisho Zue called it 'Kuzu no I' that was a washbasin of Katsushika Junja Shrine. Why don't you visit Kazura no I Well?
page top

Kazura no I Well
Kazura no I Well along Kosaku Road in Kurihara Hongo Village (the old name of this area) was to be the washbasin of Katsushika Jinja Shrine. The well has a diameter of 180 centimeters and it is reinforced with concrete now. Old sayings tell that the water in the well would connect to the Palace of the Dragon King. And it could not be dried up in any terrible drought. Moreover, it has been said that people having agues could be well if they drank the water in the well.
There is a stone tablet in front of the well, it was built in 1812 and Soshiro, a manager of Hongo Village, asked a famous artist Nanpo Ota Shokusanjin to write some sentences on the on the stone tablet. A year after that,this stone tablet and the sentences were introduced by Kindai Suzuki in his book 'Katsushika Zushi Taguribune'. And Edo Meizho Zue, a guide book of Edo, published in 1836, it was introduced in a picture in the articleof Katsushika Jinja Shrine and it is called 'Kuzu no I'.
After that, it had not been written in any articles until Kafu Nagai, a famous writer, introduced it in his essay 'Katsushika Miyage (the souvenirs from Katsushika)' and it became famous again.


The Sentences on the stone tablet at Kazura no I Well

Selected by Nanpo Ota.
Built in March 1813
Soshiro, the manager of Hongo Village

Funabashi-shi Board of Education

The Map and Access to Kazura no I Well

The Landmarks Neighbor Of Kazura no I Well