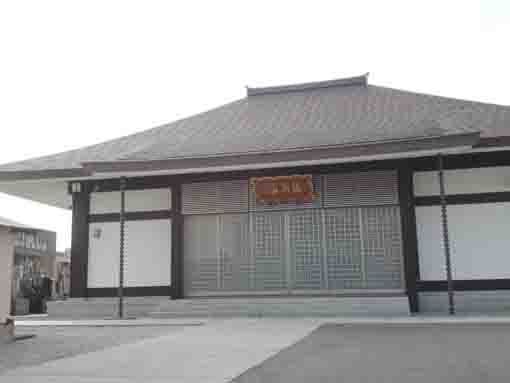 Bononji is a temple in a residential area in Higashi Kasai Edogawaku, it is belonging to Sotoshu. The main hall is a modern designed but it has a very long history. According to the records of Bononji, its history started in Heian period when Jikaku Daishi built it. In this temple, an old stone bar registered as the cultural asset of Edogawaku that might was built in Kamakura Period has been dedicated in the main hall of it. And Bononji is one of the temples in Kasai Daishi Mairi that is a kind of a pilgrimage to temples dedicating Kobo Daishi in Kasai areas started in Edo period. A guidebook in Edo period called 'Shinpen Musashi no kuni Fudokiko' tells that Bononji is a branch temple of Kotokuji Temple in Kanasugi village, Katsushika County, Shimousa provinces (now Kanasugi, Funabashishi, Chibaken) and it was named Kaichosan. Bononji is a interesting temple that shows us history and culture in Kasai areas in Heian, Kamakura and Edo period. Why don't you visit Kaichosan Bononji Temple?
page top

Bononji is named Kaichosan that is a temple belonging to Sotoshu, the principle image of it is a statue of Kannon Bosatsu. It is said that it was built by Jikaku Daishi in 847. And Eishitsu Jusei rebuilt it in early Edo period.
According to the records in Bononji, after Jikaku Daishi studied Buddhism in Tang Dynasty of China, he was caught in the storm while going back to Kyoto, and his ship could not wreck since the light from Kanzeon Bosatsu sparkled and the storm stopped, he finally landed on this area.
Then, he carved the statue of Kanzeon Bosatsu on a piece of a chinaberry, this is the beginning of this temple.

■ A Ston Tablet registered as a cultural asset of Edogawaku
This tablet was preserved in the main hall to dedicate for several hundred years ago with the statue of Jizo Bosatsu. It was built in June 1317, it is a precious tablet that tells life in this areas in Kamakura period.

March 2001
Edogawaku Board of Education