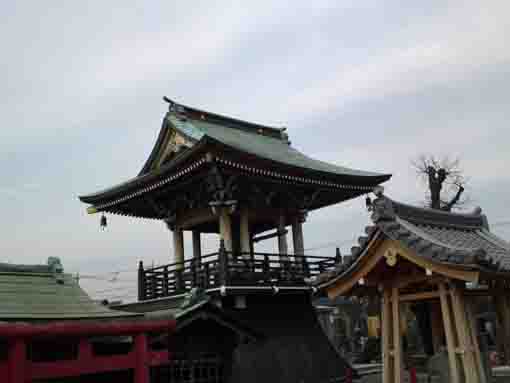 Kaihosan Jizoin Shoenji is an old temple belonging to Shingi Singonshu Sect built in Muromachi period. It is very interesting that there are 2 shinto shrines and 4 buddhist temples lined up in this area. A long white wall is connecting from Tozenji and Katori Jinja to the north side of Shoenji. And the south of it, there is Seikoji standing. This area really sounds like 'Teramachi (Temples' town)'. Moreover, people living in Kasai have keep a traditional festival called 'Kasai Daishi Ko', it is a pilgrimage to temples and shrines related to Kobodaishi in Kasai areas since Edo period. Shoenji is one of these temples. Why don't you visit Kaihosan Jizoin Shoenji Temple?
page top

Shoenji was an old temple built before Bunmei Era (1469～1486). Ryohan Hoin (died in 1501) rebuilt it and became the first chief priest of it. Shoenji belongs to Shingi Shingonshu and it was named 'Kaihosan Jizoin Shoenji'. The principle image of it is the statue of Enmei Jizo Bosatsu. In 1824, the 20th priest rebuilt some buildings, but the roof tiles on the main hall was fallen by the great earthquake called Ansei no Daijisin occured in November 11th of 1855. The main hall was rebuilt in 1964.

■Koshinto (built in 1663) registered as a cultural asset by Edogawaku
This square shaped stone tower with a roof is called 'Koshinto', on the front side, there is scribed letters '奉造瑩庚申結衆二世安楽 (building this tower for our two generation to live in peace)' and three monkeys on foot. Koshinto is related to a religious belief called Koshin Belief in Taoism. It tells that Sansi that is an insect telling peoples' sins to the god once in 60 days, this day is called Koshin day in Chinese calender, and people don't sleep in the night at the day to stop Sanshi going out of their bodies. Kosihinto is on the left behind the gate.