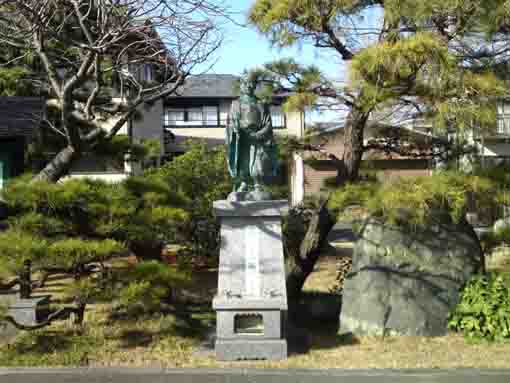 Anshosan Taishiin Seikoji is an old temple built in Muromachi period that stands in quiet residential areas in Kasai Edogawaku. According to Shipen Musashinokuni Fudokiko (a book of geographic study of Musashi Province), Seikoji is a branch temple of Kinzoji in Kami Imai Village (now Edogawa 3 chome) belonging to Jodo Sect. It was built by Tokuyo, a buddhist monk, in 1502. On the right side of the approach road, there is a statue of the young venerable Honen standing. The land where Seikoji stands is said to be the remains of Nagashia Takajo a castle in Sengoku Period. Moreover, Seikoji is a temple belonging to Kasai Daishi Mairi (the pilgrimage to Daishi in Kasai Areas). Seikoji tells history and culture of Edogawaku. Why don't you visit it?
page top

Seikoji is a temple that is belonging to Jodoshu is named Anshosan Taisihin, it was built in 1502 by Tokuyo Hoin. It dedicates the statues of Amida, the venerable Honen and Zendo Daishi.

The Remains of Nagashima Takajo Castle in the Middle Ages
In 'Odawarashu Shoryo Yakucho' (a notebook recorded the land owners of Kanto regions under Hojo Family in Odawara), there were 16 villages in Edogawaku at that time, and Nagashima Takajo Castle was appeared on it.
'Katsushikaki' (a guidebook of Katsushika County in Edo period) published in 1749 tells that it was a port under the castle of Nagashima. So it was the first evidence showing the existence of the castle in the Middle Ages called Nagashima Takajo.
The areas around Seikoji had been prosperous, and there have been some land names related to a fort and a castle. If the castle had been, it might be stood in the land where Seikoji stands now.

■The Wooden Statue of sitting Datsuiba registered as a cultural asset by Edogawaku
It is 71.6 centimeters tall and was carved in the late Muromachi Period. This is a yosegitsukuri sculpture of a female devil called Datsuiba who robs clothing of dead at the shore of the Styx. It is a very precious work in Edogawaku.

March 2013
Edogawaku Board of Education