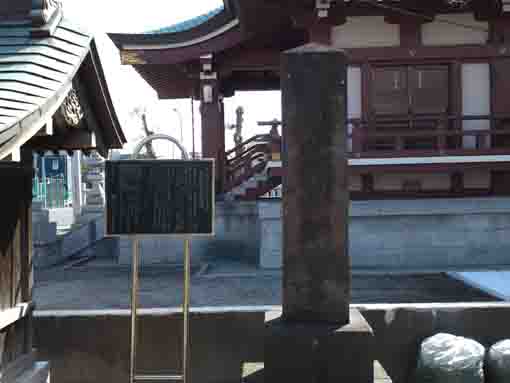 Shinzoin is a temple in Higashi Kasai Edogawaku belonging to Buzanha in Shingonshu. It is called Ikazuchi (thunder) and Namikiri (cutting waves) Fudo that has been deeply believed since Edo Period. There is a stone guidepost telling the way to Ikazuchi Fudo standing in this temple. This guidepost had stood on the south bank at the easten end of Shinkawa River. Now there is a signpost for describing the remains there. The stone guidepost has some marks of mooring lines of boats on the river that tells many people had visited Shinzoin a that time. On the south of this temple, a shrine called Ikazuchi Katori Jinja stands. Anyway, according to Shinpen Musashi no kuni Fudokiko, a geographic guidebook describing Musashi Province published in Edo period, Shinzoin was a branch temple of Zenyoji in Koiwa famous for Yoko no Matsu (a huge pine tree), and it was named Kaishosan. Kyoten or Sakuden who was a priest passed away in March 25th of 1740 rebuilt the temple. The principle image was the statue of Fudo Myouo. During the era of the Emperor Gokashihar (1500～26), a man named Suzuki had have this sculpture as his family treasure, but the fortunes of his family had been on the wane. He thought that he had not taken care of the statue of Fudo Myouo and he would like to build a temple to dedicate it. At that time, an old Buddhist monk came him to ask a night stay his house. Then, he talked about his Fudo to the monk. The monk found something miracle in it. So the monk built a hall to dedicate it. This was the beginning of Shinzoin. The monk believed in Fudo Myouo. One night, an itinerant Buddhist monk carrying this sculpture on his back appeared on his dream, then the old monk checked the back of the Fudo and he found two letters '翔摩 (shoma)' there. He then pleased that it was excitingly graceful. To preserve it carefully, the door of the hall had opened every May and September annually. Moreover, in Eiroku Era (1558～1570), a big weather dissaster had happened, the buildings in the temples were trembled and a part of an sword got out of the box. And there was much blood scattered on the yard of the temple. People around Sinzoin thought that the Fudo in this temple would beat the evils coming with the disaster down. Since then, the sculpture has called Ikazuchi Fudo (thunder Fudo), and many people believed that it has been said that this temple must not be stricken by lightning. There were two swords preserved in Shinzoin, one was very old and another one was found under a pine tree in this temple in 1782.
In addition, Shinzoin is one of the temples of Kasai Daishi Mairi, the pilgrimage to Daishi in Kasai.
Why don't you visit Kaishosan Shinzoin and Ikazuchi Katori Jinja?
page top

Shinzoin is an old temple in Higashi Ukita Village built in Tenbun Era (1532 - 1554), it belongs to Buzanha in Shingonshu and is named Kaishosan. Its principle image is a wooden statue of a standing Fudo Myouo.

■ Namikiri and Ikazuchi Fudo
A fisherman who had a heavy storm at Tokyo Bay on the south of Kasai was helped by light that a dragon on a pine tree in Shinzoin emitted. He found a sword under the tree and dedicated it beside the statue of Fudo. Then it has been called Namikiri Fudo. And the Fudo beat the thunder in the heavy rain, then, it has been called Ikazuchi (thunder) Fudo.

■ Shomen Kongo on Koshinto Tower with letters 元禄１１年 (1698) registered as a cultural asset of Edogawaku
This stone tower was built by a group of villagers in Higashi Ukita called Ikazuchikochu in 1698. There are some reliefs, Shomen Kongo who beats evil epidemics stands center with two boys and four devils. This was the standard design of this kind of the stone tower called Koshinto. It could be fixed in 1805.

The Stone Guidepost to Ikazuchi Fudo

The Stone Guidepost to Ikazuchi Fudo

It is a cultural asset as a historical record of Edogawaku
The principle image of Shinzoi is called Namikiri Fudo or Ikazuchi Fudo was very popular.
This Guidepost describing the way to Ikazudhi Fudo was built in 1818. It was first on the south bank of the east end of Shinkawa river. Bu it was broken in April 1991, and it was repaired and moved to the site in Shinzoin.
On the guidepost, there are some marks of mooring lines of boats going on Shinkawa River.
[The letters on the Stone Tower]
(Front) 雷不動明王 (Kaminari Fudo Myouo), (Right) 文政元戌寅年６月再建 (rebuilt in June 1818), (Left) 従是南十三丁 (about 1300 meters to the south), (Back) 海松山第十七世鏡融 (Kyoyu, the 17th chief priest of Kashosan),松□忠孝 書 (written by Tadataka Matsuguchi), (the upper part of the foundation) 御蔵前講中、神田川 (Okuramae Kochu, Kandagawa)

Marchi 1992
Edogawaku Board of Education

The Remains of the Stone Guidepost to Ikazuchi Fudo

The Rimains of the Stone Guidepost to Ikazuchi Fudo

It is a cultural asset as a historical record of Edogawaku
The principle image of Shinzoi is called Namikiri Fudo or Ikazuchi Fudo was very popular.
There had been the guidepost describing the way to Ikazudhi Fudo built in 1818 here on the south bank of the east end of Shinkawa River. But it was broken in April 1991, then it was repaired and moved to the site in Shizoin.
On the guidepost, there are some marks of mooring lines of boats going on Shinkawa River.
[The letters on the Stone Tower]
(Front) 雷不動明王 (Kaminari Fudo Myouo), (Right) 文政元戌寅年６月再建 (rebuilt in June 1818), (Left) 従是南十三丁 (about 1300 meters to the south), (Back) 海松山第十七世鏡融 (Kyoyu, the 17th chief priest of Kashosan),松□忠孝 書 (written by Tadataka Matsuguchi), (the upper part of the foundation) 御蔵前講中、神田川 (Okuramae Kochu, Kandagawa)

Marchi 1992
Edogawaku Board of Education 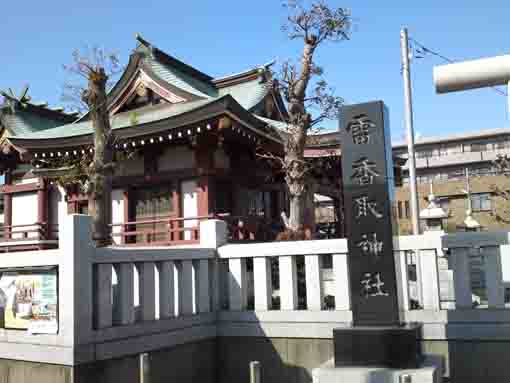 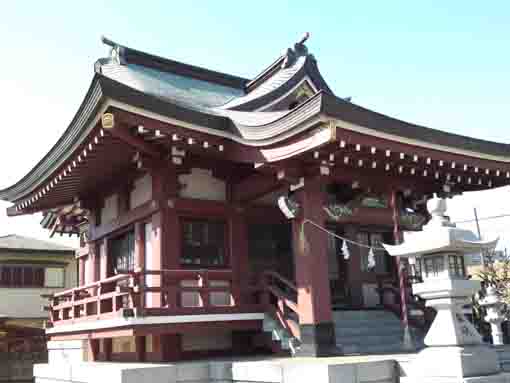 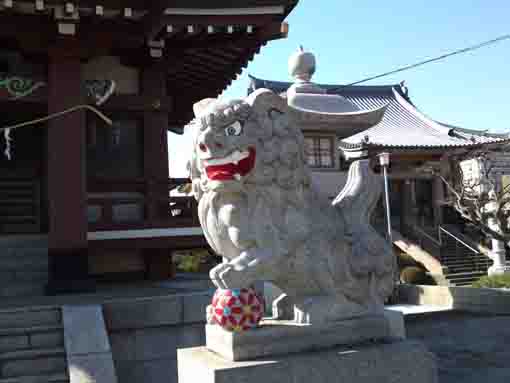 Ikazuchi Katori Jinja Shrine stands on the south of Kaishosan Shinzoin Temple. According its historical record, it was built in 1769. And Shipen Musashi no kuni Fudokiko introduces that it is the guardian deity of Kuwakawa Shinden Village. The red thick pillars and the beautiful warps on its roofs give strong impressions. A komainu sitting in front of the hall who has a colorful ball in its hands is cute, and it welcomes visitors friendly. Why don't you visit Ikazuchi Jinja Shrine?