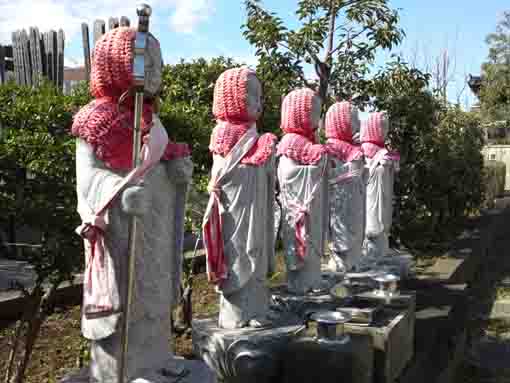 Rukoji is a temple in Kita Kasai in Edogawaku belonging to Shingonshu Buzanha. In Shinpen Musashi no Kuni Fudokiko, a geographic guidebook describing Musashi Province published in Edo period, it was a blanch temple of Zenyoji in Koiwa, it was named Myokosan and it principle image was the statue of Fudo. Viewing from it gate opening to the east, there is a stone white approach road stretching and the end of the road, two white huge stone lantern and the main hall are standing, the stone statues of Jizos are standing on the left of them. The temple looks bright since its name has two letters of light '光' in it. Moreover, Rukoji is a temple belonging to Kasai Daishi Mairi (the pilgrimage to Daishi in Kasai) that has kept in this area since Edo period.
Why don't you visit Rukoji Temple?
page top

Ryukoji is a temple belonging to Shingonshu Buzanha and it is named Myokousan. It was built by the venerable Kenyo in 1661. The principle image is the wooden statue of a standing Fudo Myouo.
Ryukoji had managed Inari Jinja Shrine next to it by Meiji Restoration. The main hall was built in 1972.

Kasai Daishi Mairi (the pilgrimage to Daishi in Kadai) registered as a cultural asset of Edogawaku
Kasai Daishi Miri is a pilgrimage to visit some sacred places dedicated Kobo Daishi.
In Edogawaku, it has been held since Edo period. Daishiko, a group of people leading the pilgrimage, is now divided into four, and they visit the sacred places in each in May 21st that Kobo Daishi had gone.
The people living in Funabori, Ukita, Kuwakawa, Kojima visit Ryukoji since it is one of the sacred places belonging to the group in Funabori , Kojima and Ukita now.

March 1990
Edogawaku Board of Education