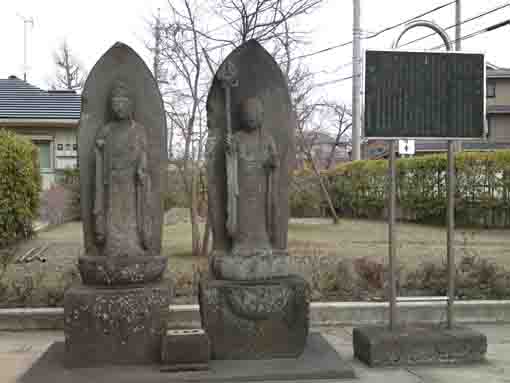 Shosenji is an old temple in Higashi Kasai in Edogawaku belonging to Jodoshu and it was built in the late Sengoku period in 1562. There are statues of Jizo Bosatsu and Amyida Nyorai as koshinto towers, they show people in this area believed in koshin belief in Edo period. According to Shinpen Musashi no kuni Fudokiko, Shosenji was built by the venerable Hoyo and it was a branch temple of Kinzoji Temple in Edogawa 3 chome. It was named Ikkosan Muryoin, and the principle image of it was the statue of Amyda Nyorai. Moreover,Shosenji is one of the temples of Kasai Daishi Mairi (the pilgrimage to Daishi in Kasai). Why don't you visit it?
page top

Shosenji is an old temple in Kuwakawa village (now Higashi Kasai) built in 1562. It belongs to Jodoshu and was named Ikkosan Muryoin. the venerable Seirensha Hoyo Seikyo Daiosho built the temple. It dedicates the statues of Amyda Sanzon (Amyda Nyorai, Kanzeon Bosatsu and Seishi Bosatsu).
There is a koshinto tower shaped of Jizo Bosatsu with letters of the year '万治３年' (1660) beside the gate and there is another tower shaped to Amida Nyorai in the gate. These towers were built by people who believed in Koshin belief that an insect called 'Sanshi' living in human body get out of it once in 60 days and goes to the god in heaven to tell sins of the owner of the body. Shomen Kongo was generally carved on the tower in Edo period, but Jizo and Amida were carved in the early Edo period.