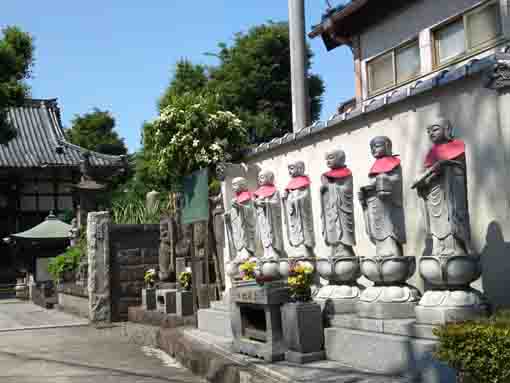 Iousan Oushinin Tozenji is a Buddhist temple standing in quiet residential areas in Higahsi Kasai Edogawaku. It has shrines and temples in each direction, so it seems like Teramachi (a temples town). On the way in between houses, there are 6 stone statues of Jizo in front, and Tozenji is on the left. This temple was an old temple belonging to Shingonshu Buzanha built in the middle of Muromachi period. The principle image of it is the sitting statue of Yakushi Norai who is famous for having power to cure eye diseases. There is a written the manner to pray on the front window of the main hall, so visitors could pray in safe minded. Why don't you visit Tozenji Temple?
page top

Tozenji is named Iousan Oushinin belonging to Shingonshu Buzanha. It was the beginning of this temple that the venerable Enku from Kawachi (Osaka) built a small shrine in this area in 1152 to dedicate Yakushi carved by Kasuga to pray peace in the eastern provinces since he had seen a dream related to the areas. And the venerable Raiju (died in 1411) rebuilt this temple.

■the wooden statue of the sitting Yakushi Nyorai
It was registered as a cultural asset by Edogawaku in March 9th of 2009. The principle image of this temple was carved in the middle of Kamakura period. It is a 82 centimeters tall beautiful yosegitsukuri sculpture that is famous for having power to cure eye disease. The principle image is not always opened, it is exhibited every 33 years.

■the wooden statue of sitting Aizen Myouou in a zushi box
It was registered as a cultural asset by Edogawaku in March 9th of 2009.
It is a 11 centimeters tall skillful sculpture carved on a piece of wood. It is kept in a zushi box made in 1839. Aizen Myouou who sits with his legs crossed on a lotus flower is painted with skin color and traced with gold sheets.

■Kasai Daishi Mairi (the pilgrimage to temples dedicating Kobo Daishi in Nagashima and Kuwakawa areas in Kasai) registered as a traditional asset by Edogawaku
Tozenji is a temple belonging to Nagashima and Kuwakawa group of Kasai Daishi Mairi that is the pilgrimage to the temples dedicating Kobo Daishiin Kasai Areas. This pilgrimage had been popular among the people lived in the areas now in Edogawaku.


March 2018
Edogawaku Board of Education