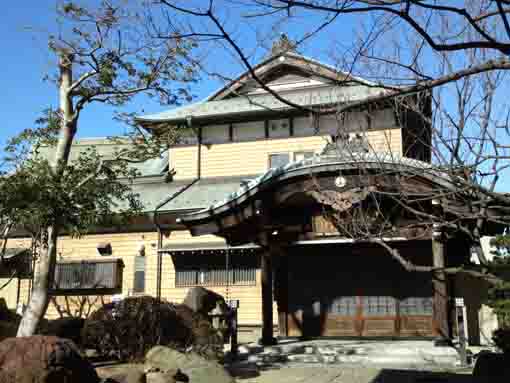 Anrakuji is a temple in Kita Kasai Edogawaku belonging to Jodoshu. It has a unique shape bell tower, the tower is designed as a gate, so it is very noticeable from the busy street on the east. Peep into the bell gate, there is a small garden and a wooden hall behind it. And a large modern building as the main hall stands behind them. According to Shinpen Musashi no Kuni Fudokiko, a guidebook describing Musashi Province in Edo period, Anrakuji was a blanch temple of Tozenji in Kogane village, Katsushika County, Shimousa Province (Kogane, Matsudoshi, Chibaken) and it was named Kintaisan Fudanin.
Peep into the bell gate in Anrakuji, visitors could forget their everyday life and enjoy spending time in the small garden. Why don't you visit it?
page top

Anrakuji is a temple belonging to Jodoshu and is named Kintaisan Fudanin. It was built by Hoyo Denryu Hoin who was passed in 1652. The principle image is a statue of sitting Amida Nyorai.

■ The Bell Gate
It is said that the Bell Gate was built in Edo period. It was moved from an old temple in Isawa in Yamanashiken. It is a wooden two-story gate and its roof is copper gabled rooves. It is used long pillars connecting the bases and the rooves. The bell was casted in 1972.

■ The Grave of Randen Ooe
Randen Ooe was a Confucian in Edo period, sometimes he was called Genba Hisakawa. He was a son of Genpo Ooe, a Confucian in Kyoto. his books are '藍田遺稿 (Randen's unpublished manuscripts)' , '詩語国字解 (the description of the letters in words used in poems in Japan)' and so on.

■ The Stone Tablet for Celebrating Eisho Murata registered as a cultural asset of Edogawaku in February 1987.
Eisho Murata opened a private school in Nishi Ukita Village in 1854 to teach calligraphy. It was built by his students with their gratitude.

December 2002
Edogawaku Board of Education

The Map near Kintaisan Anrakuji