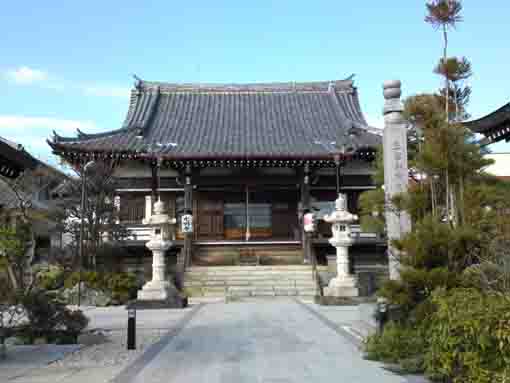 Komyoji is a temple in Funabori Edogawaku belonging to Buzanha in Shingonshu, it is surrounded with green zones such as Ichinoe Sakaigawa Water Park in the east and Ichinoe Sports Park in the north. The principle image of it is a statue of Fudo Myouo, it is specially called Yokomichi no Ofudosama (a fudo on the sidestreet) that has been known that it has miracle power to cure eye diseases. A guidebook published in Edo period called 'Shinpen Musashi no Kuni Fudokiko' tells it was a blanch temple of Zenyoji in Koiwa. In spring, Komyoji is decorated by cherry blossoms in the parks. Why don't you visit it?
page top

Kyomyoji is a temple named Tokosan Yokomichiin that belongs to Shingonshu Buzanha. It was built by the venerable Kakusen in 1614 to dedicate a statue of Fudo Myouou called 'Kumokiri Fudoson' as its principle image.
Since a road in front of the gate goes to the sidestreet, Komyoji is called 'Yokocho no Ofudosama (the fudo of the sidestreet), and many people has visit on their way to Narita from Fukagawa because it has been famous for having miracle power to cure eye diseases.
Komyoji had fire in 1782 and had the great earthquake in 1923, so the main hall was built in 1974.

■Kasai Daishi Mairi (the pilgrimage to Daishi in Kasai registered as a cultural property by Edogawaku)
To visit the scared places related to Kobo Daishi in Kasai Erea has been popular since Edo period. Komyoji is one of them in the group of Funabori,
Ukita, Kojima.

The Map near Tokosan Komyoji