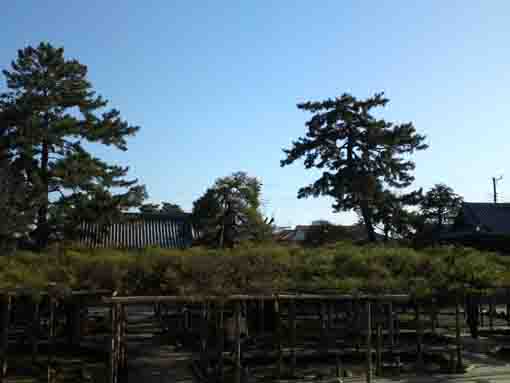 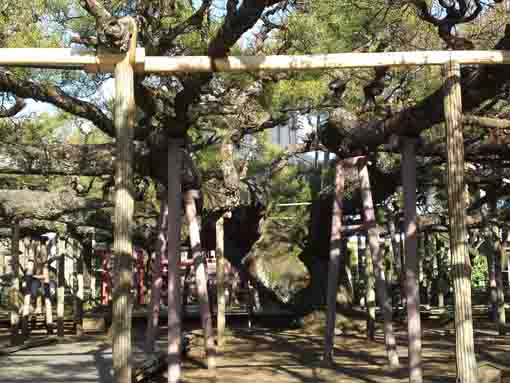 There is a huge black pine tree standing in Seijusan Jizoin Zenyoji Temple in Higashi Koiwa, Edogawaku, Tokyo with its long branches spreading like a bird taking a rest on the beach with its wings spreading. It is named 'Yoko no Matsu' designated as a National Natural Property. Passing through both Niomon and Fudomon gate, visitors could find a black pine tree in the yard covered with white sands in front of them, it could be seen a wood in an island on blue lagoon. Though the over 600 years old black pine tree grows enough thick and it looks like a wood, it is a pine tree. Viewing from the top of Mt. Yokozuna in the temple is specialy wonderful.
Besides, there are several black pine trees lined along the approach road of Zenyoji Temple. These pine trees including Yoko no Matsu imply that the area around the temple used to be close to sea shore.
Why don't you visit Yoko no Matsu in Zenyoji Temple? 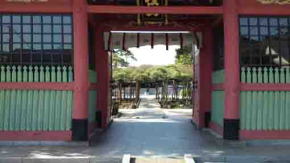 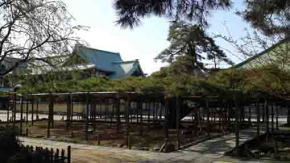 Yoko no Matsu in Zenyoji Temple

Yoko no Matsu is a over 600 years old black pine tree with 8 meters tall and a trunk with 4.5 meters in diameter. The branches spread about 31 meters from east to west and 28 meters from north to south. Yoko no Matsu is counted as one of the most beautiful pine trees in Japan.
Keigatsu Omachi, a writer in Meiji Era, described Yoko no Matsu in 1906, 'There is an old pine tree having about 18 meters long branches spreading to four directions, it has over 100 props supporting the long branches. This pine tree is the best in Tokyo.'
Kiyotaka Kaburaki, a ukiyoe painter, described Yoko no Matsu in his work named 'Shin Kotozusetsu' in 1923, 'Yoko no Matsu gives more wonderful impressions than Hoshifuri no Matsu.'
In 1981, Yoko no Matsu was compared with Okano Matsu. And Shonosuke Kimura, the sumo referee at that time, decided that the competition ended in drawn.
Once the tree had lost its health, but it has been getting well by the project to recover it from 2002 to 2011.

The Location Access to Yoko no Matsu in Zenyoji Temple

Yoko no Matsu (the huge pine tree) in Zenyoji Temple