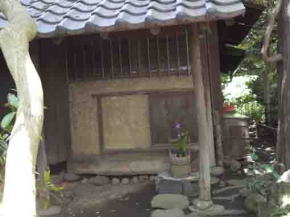 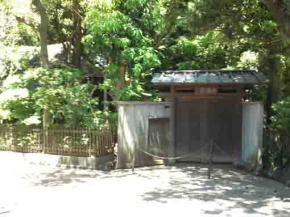 Passing through the several cherry trees along the approach road to Satomi Park, there is a small wooden house covered with green woods, it is the tea room of Shikisei Oribe Tea School. There is a signboard describing the tea school, but there is no name of the tea room. Actually, a name plate is hanging on the gate, the letters are too artistical to read. The tea room gives some dramatic imaginations when you look it through the fences.
Shikisei Oribe School of Tea Ceremony started by Oribe Furuta, a sengoku daimyo and a master of the tea ceremony was registered as an intangible cultural property by Chiba Prefecture in 1955.
Why don't you visit the tea room of Shikitei Oribe School of Tea ceremony?
page top

The Shikisei Oribe School of tea ceremony had been founded by Furuta Oribe no Sho Shigenari (ca.1600).
Characteristic of the Shikisei Oribe School is that, it can be considered the 'public (open) tea' based on the serving of tea in the 'shoin' (drawing room) style tea arbor as opposed to the 'private (personal) tea' or the 'wabi-cha' served in the 'so-an' after Sen no Rikyu.
Furuta Oribe had elaborated his originality in his arbor and tea ceremony appliances, leaving behind the Oribe-yaki pottery and the Oribe-toro (Lanterns).
He also had Hon'ami Koetsu, Kobori Enshu and so on as his disciples.

Oribe Furuta The Founder of Oribe School of Tea Ceremony

Oribe Furuta was a Sengoku Daimyo and the master of tea ceremony from Mino province (Gifu Prefecture) from Azuchi Momoyama to Edo in late Sengoku period. His first name is Shigenari, he was called Sasuke amoung his friend and relatives, Oribe was nickname since he was appointed as the Oribe no Jo. He was the founder of Oribe School of Tea Ceremony.
First, he worked at Toki or Saito clan in Mino province, next he worked at Nobunaga Oda, then Hideyoshi Toyotomi. When Hideyoshi became the Kanpaku Dajodaijin (the supreme minister and chancellor), Oribe was also appointed Oribe no Jo and he was given the feudal estate having 35,000 kokus (about 5,500 tons) of the annual rice crop in Nishi ga Oka in the south-west part of Kyoto. Oribe Furuta loved Cha no Yu (tea ceremony) and he studied at Sen no Rikyu. After the death of Rikyu, Oribe was praised as Tenka Ichi no Sosho (the supreme master of tea ceremony), then he began his tea school. He was counted as one of the seven disciples of Rikyu. After Hedeyoshi Toyotomi was passed, Oribe belonged to Tokugawa Clan, and he taught tea ceremony to Hidetada Tokugawa, the second shogun of Edo Bakufu. He distinguished war services at the battle of Sekigahara in 1600, However, he was suspected that he betrayed to Toyotomi clan at the battles of Osaka in Summer of 1615, as the result, he was ordered to commit hara-kiri. He was died at his age of 72. His tomb is at Koshoji Temple in Kamigyo-ku, Kyoto.
Oribe Furuta loved distorted pots and tea rooms with many windows, these kinds of artistic tastes were called 'Oribe Konomi (the favor of Oribe)' and became the major trends at that time. Oribe Yaki Potteries and Oribe Toros (lanterns) exist, and Hassoan in Nara National Museum and Ennan in the Yabuuchi in Kyoto are his style tea rooms existing now. 'Chajutsu Hyakajo (the 100 laws of serving tea)' is his masterpiece. Koetsu Honami, Hidetada Tokugawa, Enshu Kobori and many samurais were disciples of Oribe. Now Shikisei Oribe School of Tea Ceremony has been kept by Oribe Kikyokai and the tea room stands in Konodai, Ichikawa city, Chiba prefecture.

The Access To The Tea Room of Shikisei Oribe School

The map to the tea room of Shikisei Oribe School

The cenic Spots near the Tea Room of Shikisei Oribe School