Rakan no I Well found by Kobo Daishi Kukai 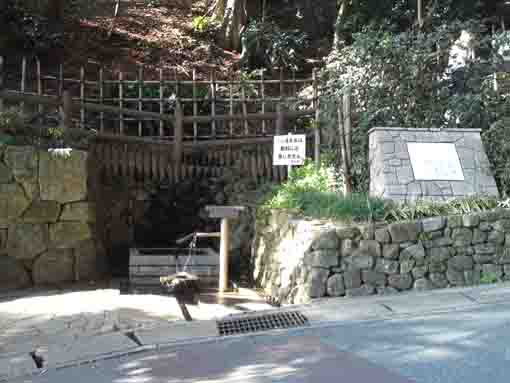 Near Edogawa River, walking down a slope on the south side of Satomi Park, walking down stone steps behind the rose garden of Satomi Park, there is a well called Rakan no I that has a legend that Kobo Daishi Kukai found. Has Kobo Daishi really come here? Nobody could agree with this legend easily. However, many heroes in history of Japan have come areas around Konodai since there was the provincial office of Shimousa built in. There are several other legends existed; Gyoki built Shimousa Kokubunji Temple and Mamasan Guhoji Temple near it. Kobo Daishi Kukai wrote the name of Guhoji in the flame hanged on the Sanmon Gate in Guhoji Temple. Moreover, Masakado Taira rode and fought, Yoritomo Minamoto pitched his camp near Konodai to collect samurai worriers in Shimousa and Kazusa to rise to his arms again. Dokan Ota built Konodaijo Castle in the area now Satomi Park is, of course he had strategic reasons but he might think there was Rakan no I well.
Why don't you visit Rakan no I well in Satomi Park?
page top

Rakan no I well in Satomi Park

Rakan no I well

Rakan no I well is a well having a legend that Kobo Daishi Kukai found and it was introduced on Edo Meisho Zue (a guide book of Edo in Edo period). The well is on the southern slope of Satomi Park, and this spring has never stopped gushing out for several hundred years. In Sengoku Period, many samurai worriers stayed in Konodaijo Castle could drink water of Rakan no I well. (Now, the water of Rakan no I well is not drinkable.)
Satomi Park and Konodai is on the Shimousa Plateau, so there are not good springs and wells. These environments would be created the legend that Kobo Daishi Kukai found Rakan no I well.

Rakan no I Well in Satomi Park