The Momorial for Samurai of Satomi Clans in Satomi Park 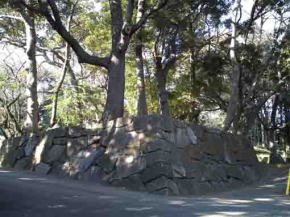 On the north of the rose garden in Satomi Park, there are three stone tablets on the stone wall apparently the castle in Sengaku Period. They are the memorial for Hirotsugu Satomi and Samurai Worriers belonging to Satomi Clan. Satomi Park is a municipal park built on the remains of Konodaijo Castle built in Sengoku Period. About 500 years ago, the battles between Satomi Clan in Awa and Hojo Clan in Sagami Province happened in this area called Konodai. Finally, the Hojo won and the Satomi lost, and there are many legends has existed in the area along Edogawa River such as in Edogawa-ku and Hime Miya Shrine in Junsaiike Park and Awa Jinja Shrine near Nakayama Hokekyoji Temple in Ichikawa city. Yonakiishi and the memorial for Hirotsugu Satomi and Samurai Worriers belonging to Satomi Clan are the important historical assets telling the stories of the second battle of Konodai in 1564.
Why don't you visit the Memorial for Samurai of Satomi Clan in Satomi Park?
page top

The Momorial Stone Tablets For Hirotsugu and The Samurais

The Momorial Stone Tablets For Hirotsugu Satomi and The Samurais

In January 4th of 1564, Yoshihiro Satomi pitched camp at Konodai with 8000 samurais to intercept Ujiyasu Hojo and his 20000 samurais. In early morning of January 8th, the Hojo made a surprised attack on the Satomi. All the Satomi's samurais were in a panic when they had heard the battle cry raised by the Hojo, they scrambled to get horses and helmets; some put only helmets on without armors and others put armors on but nothing in their hands.
As the result of the battle, the Satomi lost the battle, and Hirotsugu Satomi, Naizen Masaki and about 5000 samurai worriers were died, but nobody had held any memorial services for them. In 1829, the memorial tablet for the samurais belonging to the Satomi (left) and the grave stone of the samurais (center) were built. And the grave stone of Hirotsugu Satomi (right) was built by Tatsugoro Ishii.
Now there exist these stone tablets built to hold memorial services for the sumurais died in the second battle of Konodai after 265 years had passed.