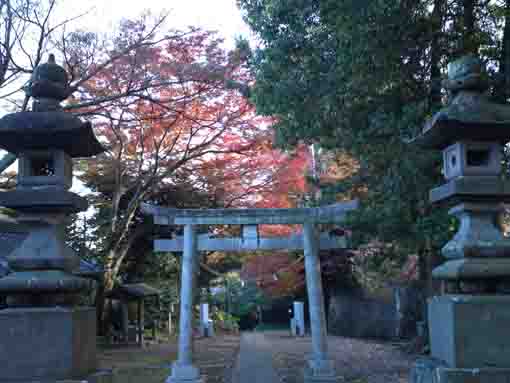 Walking along the narrow street on the east side of Satomi Park, there is a small shrine named Konadai Tenmangu Shrine. The shrine is famous for an event called 'Tsujikiri' annually holding in January 17th. Tsujigiri is a traditional event succeeded from Muromachi Period that villagers make four big snakes from some bundles of straw to draw a border line to protect a village from evil spirits and epidemics. In Ichikawa city, the events had been held at Konodai and Kokubun area. In April 24th of 1979, Konodai Tujikiri Events was registered as a municipal local cultural property by Ichikawa city.
Why don't you visit Konodai Tenmangu Shrine?
page top

Konodai Tenmangu Shrine was built on the top of Hokozuka Burial Mound as a local deity of Konodai area by Dokan Ota in 1479 and it was moved to the present place in 1875.
In Konodai area, traditional events such as Shishimai and Tujikiri has been held for several hundred ages. Tsujikiri means 'cutting off some evil spirits and epidemics killing people and animals in a village on its four entrances at its four corners by miracle powers'. There are some ways to cut off them; one is hanging up Shimenawa (a sacred straw rope) on a certain place, and another one is making Big Snakes to protect from some evils invading by their miracle power, Shimenawa is usually used in the southern part of Chiba prefecture and Big Snakes are in north.
Tsujikiri had been held in Konodai and Kokubun area in Ichikawa city until mid-1900s, now Konodai Tsujikiri held in Konodai Tenmangu Shrine only exists.
Tsujikiri is annually held in January 17th at Konodai Tenmangu Shrine. The supporters of the shrine make four 2 meters long straw snakes and give some scared alcohol then they hang them on trees at four corners of the town and put their head out of it. The big snakes keep guard against some evils for a year even though they are exposed to the weather.
Shishimai ceased to exist in 1938 since it had the rule of succession and the change of society.
May 1993
The Board of Education of Ichiakwa City

The map to Konodai Tenmangu