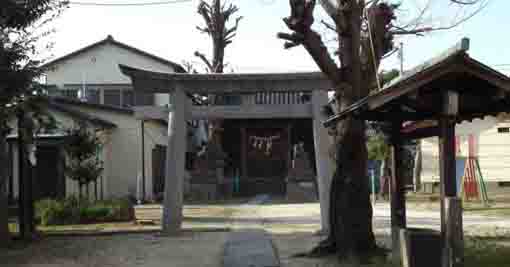 About 10 minutes walks along Gyotoku Kaido Street from JR Motoyawata Station, there is a some torii gates standing in a small shrine, it is called Kabuto Jinja Shrine. The main divine god dedicated in this shrine is Homudawake no Mikoto whose another name is the 15th Emperor Oujin. According to the history of the Kabuto Jinja Shrine, it dedicates a Kabuto helmet of the Emperor Oujin, but there are some other legends that it dedicates a Kabuto helmet of the Empress Jingu, Masakado Taira or Yoshiie Minamoto. Edo Meisho Zue (a guide book describing Edo in Edo period) tells that it dedicates a Kabuto helmet of a general who had fought in the Battle at Konodai. Edo Meisho Zue calls this shrine 'Kabuto no Miya' that was managed by staffs at Gyotoku Hachimangu Shrine at that time. Before Edogawa Flood Control Channel was built, Owada where Kabuto Jinja Shrine stands and the Tokagi, the next village of it joined to Gyotoku, so Gyotoku Hachimangu Shrine managed it. Moreover, Katsushikaki called it 'Kabuto Hachiman'. Now Katsushika Hachimangu Shrine manages Kabuto Jinja Shrine. Anyway, it has been believed deeply by samurais.
Why don't you visit Kabuto Jinja Shrine?
page top

The History of Kabuto Jinja Shrine

The History of Kabuto Jinaj Shrine