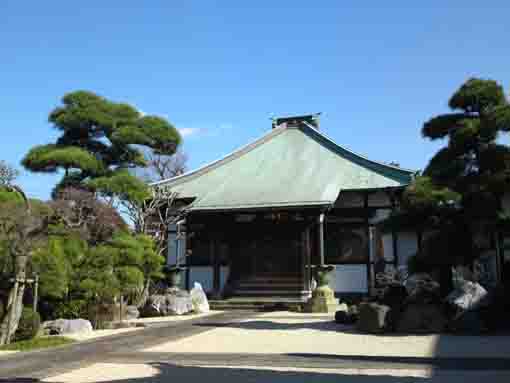 Getting off the subway at Gyotoku Station and going to Edogwa river, there is a wonderful temple suitably called the 24th temple of the 33 Pilgrimage in Gyotoku and Urayasu.
There could be seen faces of five stone statues of Buddha over the wall of the temple and they would welcome visitors along its approach road.
In addition, Edo Meisho Zue (a guide book introducing Edo in Edo period) describes that it preserved an old bell, a statue of Sei Kannon Bosatsu carved by Jikakudaishi Enjin, a stutue of the Great King Yama carved by Tankei and a picture of the venerable Honen by himself so Zenshoji Temple has been a famous temple since Edo period.
page top

The History of Zenshoji Temple

This temple was founded by the venerable Kakuyo Chozui in 1625. Masasada Shirobei Aoyama who was a local celebrity of Gyotoku donated much money to build it to pray for the response of his father's soul.
Zenshoji Temple is a branch temple of Zojoji Temple in Shiba Tokyo and Soyo Ryoteki the 14th abbot of Zojoji named the temple and the name Seiyosan was given by the 23rd abbot of Sonyo Kiyateki after Aoyama's family name.


The Event and Landmarks of Zenshoji Temple

Zenshoji Temple is the 24th temple of the 33 Pilgrimage in Gyotoku and Urayasu. In the main hall, there dedicates the statue of Senju Kannon carved when the pilgrimage had started.
The five stone Buddha near the gate was built by the Aoyama for response of their ancestors' soul in 1658. The framed letters hang on the front of the main hall was written by Bunhyo Aoyama who edited 'Katsushikaki (the history of Katsushika).

The map of the noted spots near Niihama Yacho no Rakuen