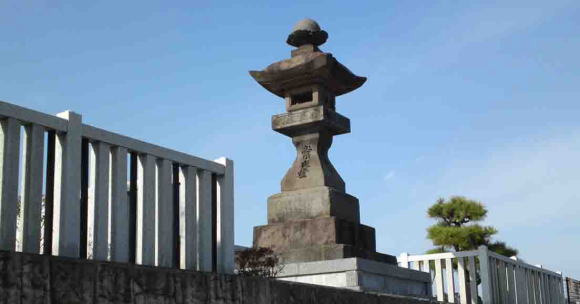 The stone night light standing on the bank along Edogawa river is Joyato designated as the municipal cultural property by Ichikawa city.
On the side of the light, Chinese characters '日本橋 (Nihonbhasi)' that is the destination of the ships from Gyotoku were carved. According to Edo Meisho Zue and Katsushika Shiryaku, the bank Joyato standing were called Shingashi, there were several inns and it was very crowded with thousands people and goods since it is the starting point of some roads to go Boso peninsula (Chiba prefecture) and Hitachi Province (Ibaraki prefecture), and also many boats from norther Kanto region and northern provinces of Japan came and brought a lot of goods to go to Edo to sell them. So Gyotoku is the east gate of Edo. Many tourists got on the boats at Nihonbashi Koamicho in Edo, and they passed through Onagigawa and Shinkawa (Funaborigawa) river, then they landed on Shingasi in Gyotoku to walk on Kashima, Sakura (Chiba), Narita Kaido Highway to their destinations. The great swordman Musashi Miyamoto and the great haiku poet Basho Matsuo might land on Gyotoku to go on their trips. Moreover, Ieyasu Tokugawa changed the flow of Tonegawa river to east and it flows to the Pacific Ocean directly since it had flown to Tokyo bay and had flooded several times. Then Gyotoku became the east gate of Edo.
There are still many old residences along Gyotoku Kaido Highway.
Why don't you visit Joyato Park?
page top

Joyato designated as the municipal property in October 7th of 1955

This Joyato was built in 1812 by the people belonging to Naritakochu a group that many people assembled to go to Naritasan Shishoji Temple. Maybe they might pray for their trip safe. And there are some names carved on the side were the people supported to build it. In Edo period, many people visited Naitasan Shinshoji Temple from Edo so Gyotoku was the important port on the way to Narita from Edo.
The bank now Joyato standing was called Shingashi (port) at that time.
The boats from Gyotoku to Edo came and went in Edogawa river was called Gyotokubune in general. They went down Edogawa river, then they passed through Shinkawa (Funaborigwa) and Onagikawa river and finally reached at Nihonbashi Koamicho. It is approximately 12.6 km long between them. People in Naritakochu and salt produced in Gyotoku were carried by the boats.
The great haiku poet Basho Matsuo and a famous painter and a cheif retainer of Tabaruhan Kazan Watanabe visited Gyotoku. Especially Kazan drew the landscapes around the joyato in his book 'Shishu Sinkei Zukan'.
In Meiji era, some steam boats appeared on Edogawa river, and a picture painted the landscape around the joyato remains in 'Narita Miyage Meisho Zukushi' a record published at that time. The picture tells that Shingashi was very crowded with thousands people going to Narita and many boats carrying many goods to Tokyo so the Joyato might be a landmark.
In 2009, Joyato Park was built to preserve it and to tell the history.

Shingashi in Edo period was crowded with thousands tourists and goods carrying on hundreds of boats on Edogawa river, and it was a starting point of Narita Kaido Highway to go to Naritasan Shinshoji Temple. The picture that shows how the port town was flourished remains in Edo Meisho Zue.
In the port, there were a guard house, bulletins and inns for tourists to take some breaks, especially an inn Shigaraki that the founder had come from Shigaraki in Oumi province (Shiga prefecture) was very famous. In the opposite side of the road of it, there was a Udon restaurants called Sasaya Udon Shop written in many literatures and having some legends that Yoritomo Minamoto had visited was also very famous and popular.
In Meiji era, steam boats went on Edogawa river, then Shingashi was changed to 'Jokigashi' as Joki means Steam. Shingashi was still crowded with people who would get on the steam boats.

The Map to Joyato Park (the Night-Light Park)