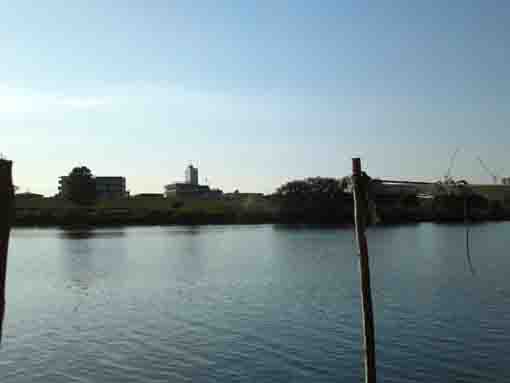 Yagiri no Watashi is a ferryboat carrying people between Yagiri a famous spot related to a popular novel 'Nogiku no Haka' written by Sachio Ito and Shibamata famous for Taishakuten or Daikyoji Temple for 400 years. The ferry at Yagiri was one of the ferry ports built by Edo Bakufu to support the everyday life of people living along Edogawa River, the ferry at Imai and Ichikawa were built at the same time, but they had not work becouse of the developments of transportation systems such as trains and cars. The boats from Yagiri no Watashi is bringing people to cross Edogawa River now.
In Edo period, the area along Edogawa River had been flourished by water transportation, thousands of products from the northern provinces passed through the river every day. Especially, the area around the ferries might be crowded with many travelers and merchants. In addition, a ferry could be a barrier to strictly check people passing through.
In 'Nogiku no Haka', the ferryboat from Yagiri no Watasi is appeared that Masao the hero of it gets on the boat there to go to Ichikawa. And the ferry has been appeared on some movies and a popular song in Japan. Yagiri no Watashi is chosen as one of the 500 attractive spots in Boso and one of the 100 wonderful sounds in spots.
Visitors could enjoy their trips on the ferryboat from Yagiri. Why don't you get on the ferryboat from Yagiri?

The Location and Access to the Ferry at Yagiri

The Noted Spots near Yagiri no Watashi and Edogawa River