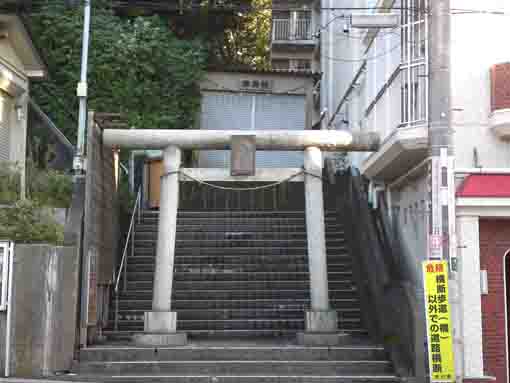 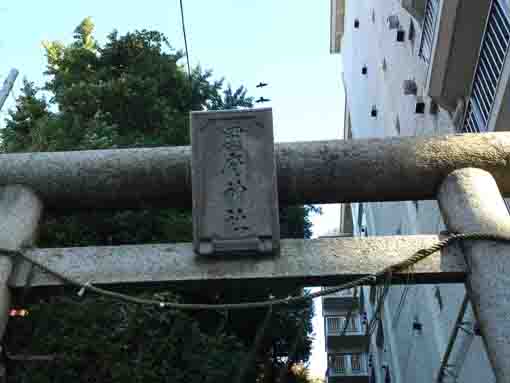 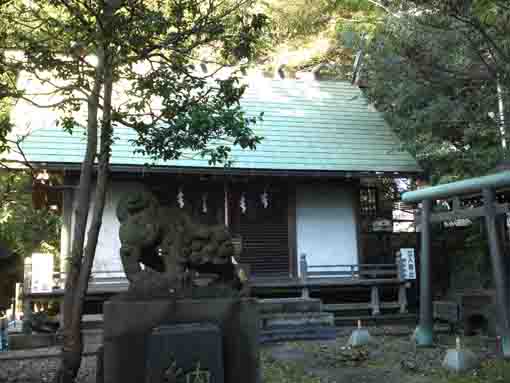 Kokufu Jinja Shrine is an old shrine dedicating the Prince Yamato Takeru on a small hill beside a busy way on between Ichikawa and Matsudo. According to some legends, a stork guided him the way to go across Edogawa River when he marched to go to Musashi from Shimousa, then he gave the area to the stork and he named it Konodai (storks' hill). In Edo Meisho Zue (a guide book describing Edo in Edo period), this area was introduced as in Konodai. On the other hand, it was named since there was the provincial office (kokufu) on the hill (dai).
Kokufu Jinja Shrine tells some legends of the Prince Yamato Takeru and the history of this area. Why don't you visit it?
page top

Kokufu Jinja Shrine is an old shrine built in 1087. Some call this shrine Ootori Oogami (the great god like a big bird). When the Prince Takeru Yamato searched for the way to go across Edogawa River from the eastern bank to the west during the battles in the eastern provinces, a stork flew to him and told him the way, so he and his arm could cross the river in safe. Then he gave the land near the eastern bank to the stork and he named it Konodai (storks' hill). Therefore, the shrine dedicates the Prince. Later, this shrine was moved here and the main hall was built in 1968.

According to some stories, the Prince Takeru Yamato, a son of the 12th Emperor Keiko, camped on this hill after he had conquered Shimousa province in his battles in east. And he wanted to go to Musashi, but there were some rivers flowing and formed some deltas on between Shimousa and Musashi, he thought and thought to go across them on foot without boats.
At that time, a stork flew to him and told politely 'I tell you a shallow point, please come after me!' The prince and his arm followed it and they could reach at the hill in Musashi.
The prince praised the stork and he gave the hill where they had camped. After that, the hill has been called 'Konodai (storks' hill). (Generally, it was the land name that the provincial office (kokufu) had been in.)
Kokufu Jinja Shrine was built in Febuary 2nd of 1087 based on some legends, so it dedicates the Prince Takeru Yamato and the principle image of it is a bill of a stork. Once, it was called Houo Daimyojin Shrine, but it was built near the remains of the provincial office of Shimousa, then it has been called Kokufu Jinja. In the site, there are other two small shrines, Inari Jinaja and Tenma Jinja dedicated.
March 1992
Ichikawashi Board of Education

The map to Kokufu Jinja

The Noted Spots near Kokufu Jinja and Edogawa River