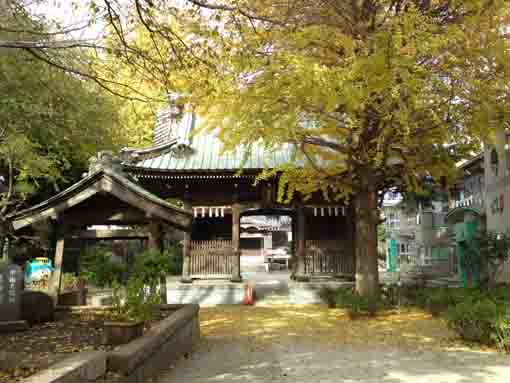 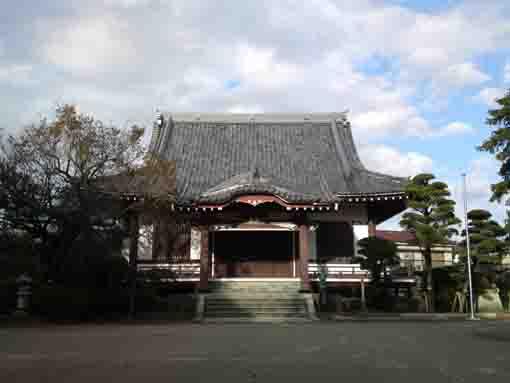 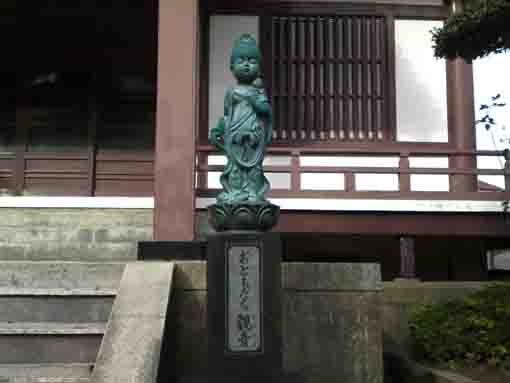 Onosan Jokoji Temple is an old temple that stands on the north of Onojo Castle that Masakado Taira had built in late Heian period. In fall, leaves fallen down from gingko trees spread on the ground like golden carpets and they light up the Niomon Gate built in Taisho Era. Behind the gate, the main hall stands and a small lovely sculpture named 'Otomodachi Kannon (a friendship kannon)' is dedicated in front of it. It gives visitors peace in mind.
Onosan Jokoji Temple in Ono Ichikawa City belongs to Nichiren Shu. It is famous for a sculpture called 'Chichinashi Niozo (the Deva King without his nipple) carved by Unkei that has been believed by many mothers having little milk to have plenty milk and to have their children healthy. Moreover, Jokoji Temple is one of the temples having stone statues of Shichifukujin (Seven Deities of Good Fortune) in Ichikawa.
It is said that the origin of Jokoji Temple that a small shrine dedicating Bishamonten built by Masakado Taira in his Onojo Castle in late Heian Period. The venerable Nichiben, one of Nichiren's disciple, converted from Shingon Shu to Nichiren Shu when Nichiren visited Nakayama later in Kamakura Period.
Onosan Jokoji Temple dedicates the statue of Chichinashi Nio registered as a municipal asset by Ichikawa City and deserves its history as dedicating the stone statue of Bishamonten that belongs to Ichikawa Shichifukujin.
このページの先頭へ

Chichinashi Nio and Its Legend

The Statue of Chichinashi Nio

The heights of the statue of Chichinashi Nio is 24.3 cm tall, and this small Ungyo style sculpture (with a closed mouth) is 31.1 cm tall with the base like a stone, this statue of Nio is an outstanding work carefully carved with brawny face, muscles and well-proportioned physique. It was constructed by assembling pieces of wood with crystal eyes, and it was colored, the upper body is naked, and its bottom is worn Mo (classical Japanese clothes) with dramatic patterns of gold painted hemp leaves. It little bit twists its body at the waist with a vajra in its right hand. But the vajra had lost and the right hand was fixed recently.
This sculpture is said to be carved by Unkei, one of the most outstanding artist in Kamakura period. The Nio does not have his nipple (chichi). Once upon a time, Unkei carved a sculpture for his mother's memorial service. When he has almost completed carving it, his mother appeared in front of him, he was very surprised at that so he cut the Nio's nipple. He once gave up and he would try destroying it. But his mother stopped him and said that it could be the god for easy delivery. Then Unkei completed it.
This sculpture is called 'Chichinashi Nio (the Deva King without his nipple) because of the legend, and many mothers having little milk believed it. 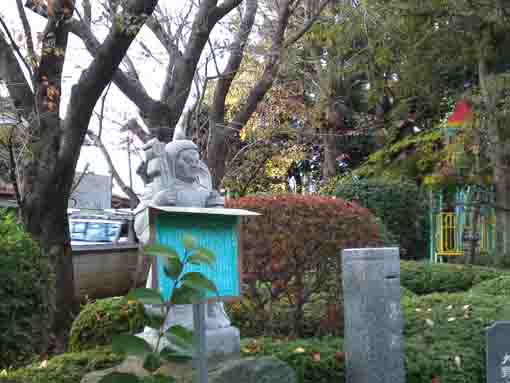 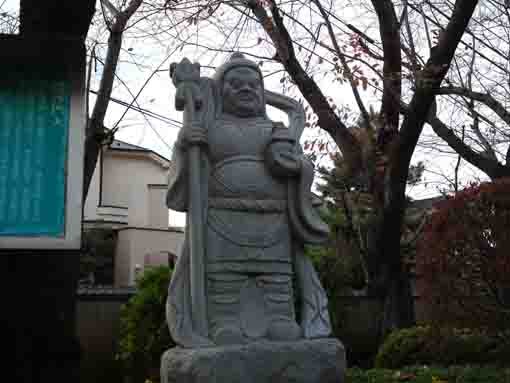 Bishamonten / Vaishravana; the God of Treasure and War

Bishamonten is a god protecting Buddhism and one of guardian deities protecting four directions, and it is also called Tamonten. He stays on the halfway up to Mt. Sumeru, Jikokuten is in the east, Zochoten in the south, Komokuten in the west and Tamonten (Bishamonten) is in the north to protect his direction. He serves Taishakuten and he controls Hachibushu to protect people believing in Buddhism. Tamonten (Bishamonten) is differed from other three gods, he is believed in Japanese as a unique god. When he is a single god, he is called Bishamonten. He has a treasure club (a weapon) in his right hand, has a pagoda in his left hand. Especially the pagoda is his symbol. And he joined to Shichifukujin with his amours. Bishamonten is believed as a god of industrial promotion and match making.
Jokoji Temple has been called 'Tamonbo' for several hundred years. It might imply 'Tamonten', so the word 'Tamonten' changes to 'Tamonbo' then 'Tamanbo'. Jokoji Temple is on the north of Onojo Temple, so it could be a guardian deity of the castle. Bishamonten had lost when Onojo Castle had lost, only the word 'Tamonbo' would have remained.
Later, Jokoji Temple has been famous for Chichinashi Niozo, and mothers having little milk to bring up their babies deeply worshipped it.
In this time, the stone statue of Bishamonten that is the origin of the word 'Tamanbo' rebuilt.


Shichifukujin (the Seven Gods of Good Fortune) In Ichikawa City