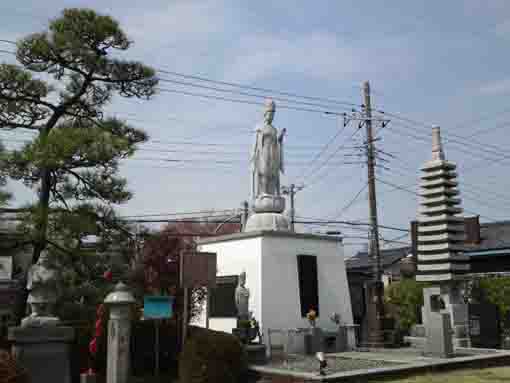 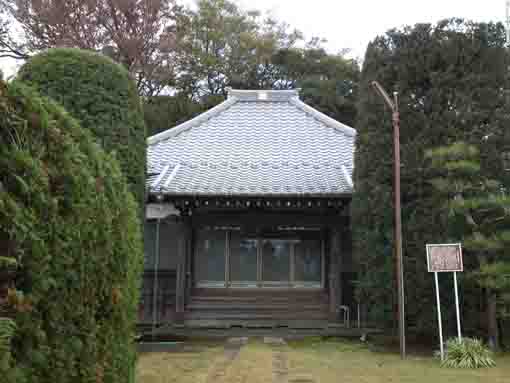 Nyoisan Shoganji Temple is very close to Miyakubo Sakauke Bus Stop, it belongs to Nichiren Sect. Visitor could find the statue of Sho Kanzeon Bosatsu (the Scared Avalokitesvara) from the Bus Stop. And it participates Ichikawa Shichifukujin (the seven gods of good fortune in Ichikawa City) and dedicates one of the seven gods, Ebisuten (the god of wealth), in it. Moreover, there is a shell mound designated as the municipal historical site by Ichikawa City named Shoganji Kaizuka in the temple.
Why don't you visit Nyoisan Shoganji Temple?
page top

Although Nyoisan Shoganji Temple was built in 1666 by the venerable Zennain Nichichu, it was found by the venerable Joshuin Nichijo, the first abbot of Nakayama Hokekyoji Temple.
According to a legend, in Edo period, a lady having serious illness from Kyoto drifted ashore on Bijogasaki in Ichikawa city. Villagers at that time helped her and set her in Shoganji Temple. Later, she moved to a neighbor village and believed Nichiren Sect, she got a prayer at Nakayama Hokekyoji Temple. After she had recovered, she became a nun and built a temple.
The guardian diety of the lady, a statue of Tenjinsama (the deified spirit of Michizane Sugawara) had lost in the sea when she was crossing it. Later, it was found in the sea, so it was called Kaichu Shutsugen no Tenmangu (the Tenjinsama appeared from the sea), and she left it at Shoganji Temple as its guardian deity. Once it was dedicated in Shrahata Jinja Shrine near it, but it was moved back to Shoganji Temple and dedicated in it again in 1986 by the 22nd chief priest of the temple. The festival day for the Tenjinsam is monthly 25th.
Moreover, the land where Nyoisan Shoganji Temple stands is a shell mound designated as the municipal historical site by Ichikawa City.

……if there are over several thousand millions of people having thier own distresses and they intensely chant the name of Kanzeon Bosatsu to pray to the Bosatsu, the Bosatsu could hear them and they could be delivered earthly bondage.……（観音経一部）

The statue of Kannonsama in Shoganji Temple is 6 feet tall sculpture made of white granite. There is a Mizuko Kannon (a Kannon for the spirits of miscarried children) on the left and an Eitai Kuyoto (a tower erected for the repose of a dead person's spirit permanently) on the right of it.

Please offer sticks of incense when you pray to Sho Kanzeon Bosatsu. If you need some, please ask it to the temple. The festival day for the temple is monthly 25th.

Ebisuten (the god of wealth)

Ebisuten is only a god born in Japan in the seven gods of good fortune (Shichifukujin). The figure of Ebisuten shows that he was first believed by people living near the sea. Some says Ebisuten is Hikohoodemi no Mikoto who loves fishing, or Kotoshironushi no Mikoto who is a son of Okuninushi (Daikokuten) and he sometimes plays fishing near Mihogaseki or Hiruko no Mikoto who is a son of Izanami no Mikoto and Izanagi no Mikoto.
First Ebisuten had been a god who protects fishermen, then he became the god of market as the fishermen sold fish at market. Then, Ebisuten is now believed by many business people as the god of thriving business. As a result, Ebisuten is dedicated throughout Japan as the fortune god gives people good fortune.
Red ribbons tied on the rod of Ebisuten is making some wishes; visitors tie the ribbon on it with their prayers. Please ask some staffs in the temple when you need the ribbon.
Nyoisan Shoganji Temple

Shichifukujin (the Seven Dieties of Good Fortune) In Ichikawa

The map of the noted spots near Shoganji