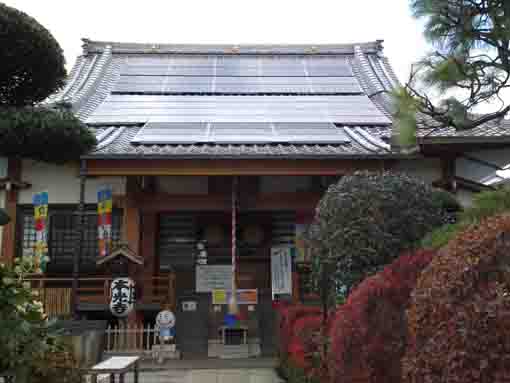 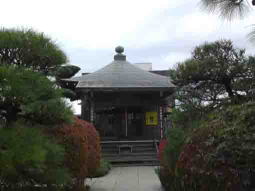 Koinsan Honkoji Temple standing at pear gardens in Ono is an old temple with 650 years history. The venerable Nichiin who was a relative of the venerable Nikko, 2nd abbot of Nakayama Hokekyoji Temple, ana his father Noriakira Ota, one of the great supporters of the Founder Nichiren. Koinsan Honkoji Temple is a very attractive temple that has some fine landmarks such as the main hall dedicates many statues, Ono Tenmangu Shrine built by Masakado Taira, Shusse Benzaiten, the three-story pagoda and a well called Kizuna no Yusui. Why don't you visit Koinsan Honkoji Temple?
page top

Koinsan Honkoji Temple was built in April 28th of 1361 in Mikado village in Ono by the venerable Nichiin for spending his retired life. In May, the name of the temple 'Hokoji' was given by Nakayama Hokekyoji Temple. Nichiin was passed away in November 17th.
Nichiin was a nephew of the venerable Nikko, the 2nd abbot of Nakayama Hokekyoji Temple and the son of Noriakira Ota, one of the great supporters of the Founder Nichiren), Nichiin would propageted Nichiren's ideas, taught a lot to supporters and believers and purified himself on the ideas of 'Risho Ankoku' by Nichiren.
The title of 'Koinsan' was said to be named after Mutsutane Nyudo Hara, and he built 'Buzenbo Hall' here and the hall was the beginning of Honkoji Temple. Mitsutane was a son of Chikatane Hara. His middle name was Magojiro. He was Buzen no Kami (the governor of Buzen Province). Later, he became a Buddhist monk and his Buddist name was Shokakuin. He was died at the battle of Yoshikawa in February 7th in 1466.
In 1816, the venerable Nichiri, the 23rd chief priest of Honkoji, rebuilt the temple.
The venerable Nichiju, the 34th priest, rebuilt the main hall in 1967 and the Kyakuden Hall in 1971.

Tenman Tenmangu Shrine in Ono is a branch Tenjin Shrine of Kitano Tenmangu Shrine built by Masakado Taira, the victor in Kanto region, in 938, this original story was written in a hanging scroll with the picture of Michizane Sugawara.
According to the scroll, Tenmangu in Ono was moved to Ono in Shimousa from Tenmangu in Kyoto by the Prince Masakado Taira in 938 in the reign of the 61st Emperor Suzaku. The Founder Nichiren consecrated. The local deity of the neighbors. By Koinsan Honkoji Temple, the administrator of Tenmangu.
Therefore, this scroll could be consecrated by the Founder Nichiren and it has been believed in for several hundred years.
There is Ogashiwa Elementary School, the secondary old elementary school in Ichikawa city, near Honkoji Temple. First it was opened here in 1874. It was natural that the elementary school was opened in Honkoji Temple since it had Ono Tenmangu Shrine that the god of scholar was dedicated.

The Three Divine Favors
1. Success in Studies
2. Success in Examinations
3. Getting Good Jobs