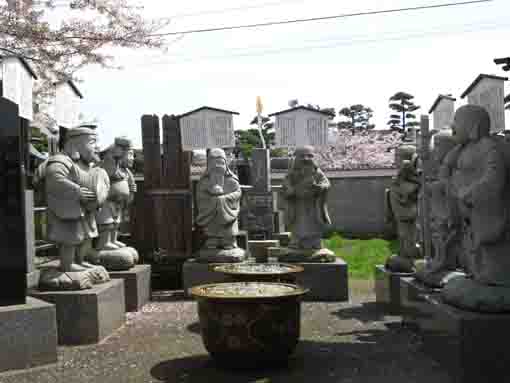 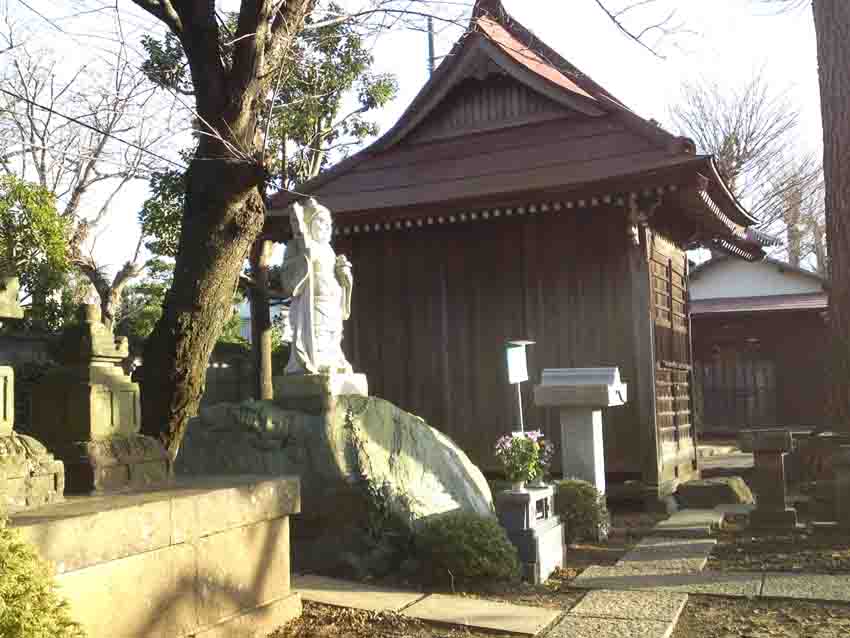 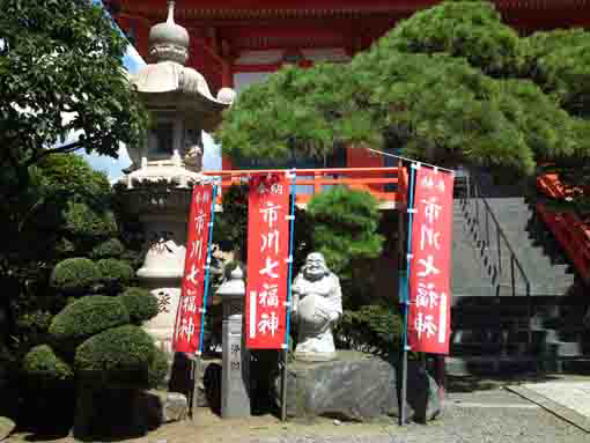 Why don't you visit Shichifukujin in Ichikawa on this movie?

Shichifukujin (the Seven Gods of Good Fortune) In Ichikawa City

The Maps for Visiting Shichifukujin in Ichikawa

PDF of the map of the landmarks near Ichikawa Ono Station

The map to Anrakuji

Shichifukuji is the Seven Gods of Good Fortun, Daikokuten, Bishamonten, Ebisuten, Jurojin, Hukurokuju, Benzaiten and Hoteison are members of the gods. Generally, they are painted as on a ship loaded with full of treasures. The worship all gods of Shichifukujin began in late Muromachi period, since the ideas that accumulating wealth would be right conduct spread among the society, Daikokuten, Bishamonten and Benzaiten are the guardian deities of Buddhism and Ebisuten is the god of folk beliefs, those gods were fixed into the holy number '7'. The worship Shichifukujin also spread in the society deeply. Especially merchants faithfully believed as the gods giving virtue, happiness, wealth and prosperity. Moreover, according to the ideas of 'Shichi Nan Soku Metsu (seven misfortunes disappear soon) and Shichi Fuku Soku Shou (seven fortune appear soon), people avoid the seven misfortunes and are given the seven fortunes when they believe Shichifukujin.

Bishamonten is one of the Seven Deities of Good Fortune in Japan, so he is a very popular god. Bishamonten is a guardian deity called 'Vaisravana' in Sanskrit, and Kubera in Hinduism. Bishamonten is only a god in Shichifukujin who looks like a samurai Busho. His body is yellow, shows anger, wears armors, puts a treasure club in his right hand, puts a pagoda in his left hand and treads on a devil in general. He is one of the Four Devas so the god has another name 'Tamonten' in Buddhism. He becomes the god of treasure and fortune, and lives in the north of Mt.Sumeru (Shumisen) and belongs to Taishakuten to protect the north with Yasha and Rasetsu. Sometimes, he is called Seziten as Bishamonten brings treasures to people. Moreover, Bishamonten is one of the Twelve Devas in esoteric Buddhism. Bishamonten is worshipped as a god of treasure.
The statue of Tamonten in the Kondo Hall in Horyuji Temple in Nara is the oldest one, and one in the main hall in Kuramadera Temple in Kyoto and Sekkeiji Temple in Kochi prefecture are famous.


Ebisuten (the god of wealth)

Ebisuten is only a god born in Japan in the seven gods of good fortune (Shichifukujin). The figure of Ebisuten shows that he was first believed by people living near the sea. Some says Ebisuten is Hikohoodemi no Mikoto who loves fishing, or Kotoshironushi no Mikoto who is a son of Okuninushi (Daikokuten) and he sometimes plays fishing near Mihogaseki or Hiruko no Mikoto who is a son of Izanami no Mikoto and Izanagi no Mikoto.
First Ebisuten had been a god who protects fishermen, then he became the god of market as the fishermen sold fish at market. Then, Ebisuten is now believed by many business people as the god of thriving business. As a result, Ebisuten is dedicated throughout Japan as the fortune god gives people good fortune.


Daikokuten (the god of wealth)

Daikokuten is originally the gods in India who has been worshipped as the god of wealth that he keeps teachings of Buddhism and makes plenty of food. According to Buddhism, Daikokuten is an incarnation of Fukutoku Enman Jizai Bosatsu (Bosatsu has perfect happiness and prosperity in his own.) He smiles and puts a hood on his head, has a sack in his left hand and a small malet in his right hand, and stands on straw rice bags. The small mallet, the sack and the rice bags means the treasure of Fukurokuju.
The Founder Nichiren recommended the venerable Nichijo dedicating the Daikokuten. He told 'Actually you spend peaceful time in your everyday life, if you pray for Daikokuten, your wish could fulfill perfectly and your everyday life could be in peace and your future life could be good.' Then, Daikokuten is dedicated as the guardian god of Nichiren Shu. The statue of Daikokuten dedicated in Kaigensan Honshoji Temple was carved by the venerable Nissei, the 41st priest of this temple, at Nichirenshu Aragyodo.

Ju Rojin is the god who hopes long life, so the god hopes that every one can live out his/her natural life span. Therefore, Ju Rojin protects people's safety and health.

It is said that people could gain their healthy bodies and long live without serious disease if they believe Fuku Roku JU and Ju Rojin.

Benzaiten is only a female god in the members of the seven gods of good fortune, and she is originally a goddess in the Indian myth, Sarasvati (called in Sanskrit), she is a wife of Brahma and the goddess of large rivers. 'Sarasvati' is feminin noun, means 'one who has water', so she is the goddess of music, knowledge since it comes from water flowing. Sarasvati is first called Benzaiten in Japan and also introduced as a goddess of knowledge. In Buddhism, Benzaiten appears on 'konkomei saisyo ou kyo' (the Golden Light Sutra of the Most Victorious Kings) at first, and it says that she gives knowledge, wealth and long life to people who preach and listen to the sutra. Howvere, she had often worshipped as a goddess of skills, and she united and mixed with Ichikishimahime-no-mikoto, therefore her statues are generally painted white in her skin with crown on her head and with biwa harp on her arm.
After the middle Ages, Benzaiten has been worshipped as the god of property and she has become a member of the seven gods of good fortune. It is told that Benzaiten has the miraculous virtue of knowledge, property, charm and matchmaking.
Benzaiten has been dedicated on the different side of Ugatokushoshin since the ancient times. Therefore Ugatokushoshin in Nakayama Hokekyo-ji Temple might be dedicated on the different side of Benzaiten as it had been built. There are thousands of visitors come to pray it as Benzaiten is famous for fulfillment of their wishes.

Hoteison is a god with a potbelly who is one of Shichifukujin (Seven Gods of Good Fortune). He really existed in Tangu Dynasty in China and he was a Buddhist priest belonging to Zen Sect. His name was Keishi, pseudonym was Cho Teishi. He always looked very happy and had large stomach. And Hoteison was famous for a trainee monk travelling around with his fabric bag on his shoulder. He has much treasure in his bag, so people believe that people in a certain area where Hoteison would visit could get good fortunes. Hoteison is considered to be an incarnation of Miroku Bosatsu who appears to save people in the end of the world. In Japan, the belief of Hoteison spread in Muromachi period as a member of Shichifukujin by the imported Zen paintings from China. Hoteison is the god of bringing good fortune, childbirth and match making.