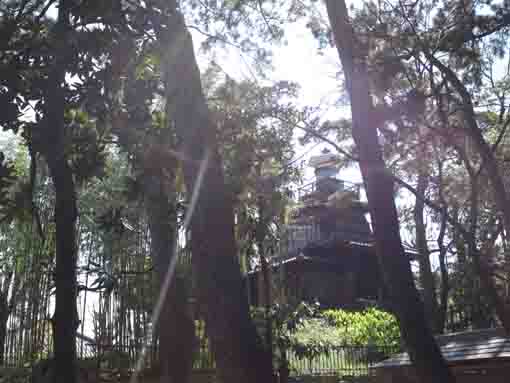 Lighthouse (Tomyo-dai) in Funabashi Daijingu on a small hill called Mt. Sengen on the right of the haiden hall of the shrine is an old lighthouse designated as a cultural property by Chiba prefecture. Some youngers and some alians of Funabashi City wondered why a lighthouse is in the shrine or in the business district far away from the sea. On a map edited in Meiji Eara, there were rice fields and the sea near by the south gate of Funabashi Daijingu. Moreover, Kafu Nagai, a famous writer lived in Ichikawa City after WWII, described the views in Funabashi City at that time several times in his diary 'Danchotei Nichijo', it tells 'In June 27th of 1946, I went to Funabashi by Keisei Line, and it was about 6 months after I had left Atami City, I saw the sea in between trees again. That's fine.' These sentences tell that there was the sea near Funabashi Station. Anyway, Minato-cho means 'Port Town' is on the southwest of the shrine, so it was natural that there was a lighthouse on the hill in Funabashi Daijingu.
This Tomyo-dai is excitingly wonderful, it would be designed in Japanese style, so it looks magnificent and strong like a Japanese Castle. Why don't you visit it?
page top

Boats sailing along the Funabashi coastline once used a lighthouse located inside the grounds of O-hi Shrine (current Funabashi Dai-jingu) as a landmark. Unfortunately it, along with th shrine pavilion, was destroyed by fire the Boshin War in 1868 (Keio 4).
Reconstructed in 1880 by the local people, current lighthouse was then formally approved by the Meiji government, and continued its operation until 1805. Located at a height of 27 meters above sea level. It was named 'Sengen-yama Lighthouse' after the shrine of the same name (Sengen Jinja) upon the grounds of which the lighthouse was constructed.
This building's first and second floor interior designs are Japanese, and the third is western style and hexagonal structure. The light source consists of their petroleum lamps and three reflex mirrors made of tin. The light could be seen from a distance of approximately 6 mautical miles (11 kilometers). The light employs no lens but the technology was quite current for its time.

Funabashi City Board of Education

From the signboard under the Lighthouse / Tomyo-dai