The Kaguraden Hall and the Big Ema 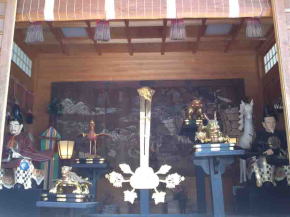 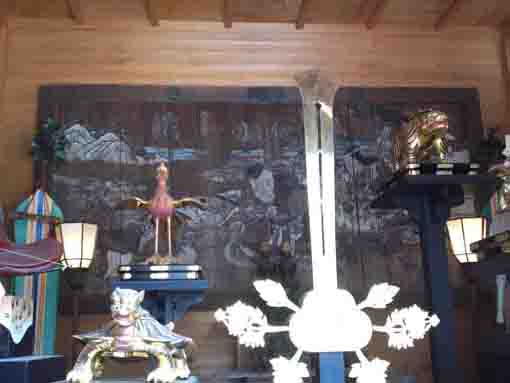 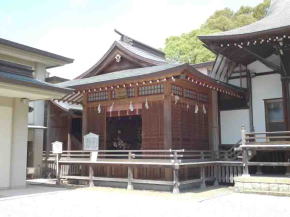 On the left side of the main hall of Katsushika Hachiangu Shrine and between the business office and it, there is a Kawaii wooden building with a gabled roof standing, it is the Kaguraden Hall of Katsushika Hachimangu. The end of the room in the hall, a big ema is dedicated, and in front of the ema, there are Zuishins (guardian gods) and the Four Chinese Gods controlling the directions having dedicated in the Zuishinmon Gate standing on the approach of this shrine. The big ema was dedicated in the end of Edo period. According to Danchotei Nichijo by Kafu Nagai, he reported in the sentences in May 9th of 1950 that it was dedicated in Kaei or Ansei era (1848 - 1859) in Edo period. The big ema is as large as a tatami mat. On the ema, the Emperess Jingu, one of the deity of Katsushika Hachimangu Shrine, and Takenouchi no Sukune, the great retainer having worked under the Emperor Chuai, the husband of the Empress, and his son the Emperor Oujin were drawn.

The Introduction of the Kaguraden Hall and the Big Ema

The Kaguraden Hall and the Big Ema in Katsushika Hachimangu Shrine

The ema on the wall was dedicated the end of Edo period, and it is the picture of one of the deiy of Katsushika Hachimangu Shrine, The Empress Jingu (the second from the right). And also Takenouchi no Sukune who was the retainer of the empress is the center of the picture. Moreover, according to legends (Records of Ancient Matters and the Chronicles of Japan), the Empress could be pregnant so she had the Emperor Oujin, the main deity of this shrine (called Hachimansama) in her body.

Kaguraden is a building in a shrine to perform Kagura in, and sometimes it is called Gakuden and Kagurado.
Kagura is one of the shinto rituals that music and dance are performed for the gods since ancient time. There are 2 Kaguras, one is called Okagura that has been performed in the Imperial Palace since Heian Period, and another one is Sato Kagura that is performed at shrines throughout Japan. In general, some Japanese musical instruments, Japanese harps, Yamatobue flutes (Kagurabue flute), Shakubyshi drums, Hichiriki flutes, are played, and drums, large and small Japanese hand drums and crapping are used some local regions.


Ema / A votive picture of a horse

Ema is a piece of rectangular pentagonal wood painted a picture of horses on. Japanese people generally write their wishes on the Emas and dedicate them in order to have their wishes realize, especially students preparing for entrance examinations dedicate them to pass.
In ancient time, people often dedicated horses to shrines. This tradition changed to pictures of horses called Ema. Now some other pictures adopted on it, birds 'Uso (lies)' on the Emas of Kameido Tenjinsha Shrine in Tokyo is the famous example of that.

The Access to Kaguraden Hall in Katsushika Hachimangu Shrine

The Map to Kaguraden Hall in Katsushika Hachimangu Shrine

PDF of the Map to Kaguraden Hall in Katsushika Hachimangu Shrine

The map to the landmarks related to Kafu Nagai in Sugano
4-2-1 Yawata, Ichikawa-shi, Chiba-ken
page top