The Father of Pears in Ichikawa Zenroku Kawakami 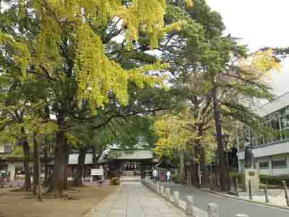 There is a big stone monument on the approach of Katsushika Hachimangu Shrine. It is the monument of Sir. Zenroku Kawakami who worked hard to make growing pears as the major product of Ichikawa City. Though the city is one of the big pear production areas, it was not adequate to farm in Edo period because of sandy places. Sir. Zenroku Kawakami succeeded to grow pears in Yawata. According to Edo Meisho Zue (a guide book describing Edo in Edo period), there are millions of white flowers of pear trees blooming like falling snow in February on the way from Mama to Yawata, it could be understood that Li Bai had said in his poem that flowers of pears looked like white snow smelled excellent. The book described Yawata and pear farms along. And Yumie Hiraiwa, very popular novelist in the 20th century, wrote a phrase about Sir. Zenroku Kawakami and pears in Yawata in her book 'Edo no Shoro Nagashi (the floating lanterns for spirits of the dead in Edo)'.
Why don't you visit Katsushika Hachimangu Shrine? It would give you a great time to enjoy walking on the approach to the main hall covered with golden leaves, looking up Senbon Icho Tree and reading the stone monument of Sir. Zenroku Kawakami while eating fresh sweet pears in Ichikawa.

The Monument of Zenroku Kawakami

Pears are the special products in Ichikawa City. Now the route 464 is called Omachi Nashi-Kaido (the Pear Highway) running from Matsudo to Kamagaya city, through the Nashi-Kaido in northeast part of Ichikawa city, there are many Nashi (pear) Farms. Kosui, and there are several kinds of pears such as Hosui, Akizuki and Niitaka are harvested in fall. The origin of Ichikawa Nashi (pears harvested in Ichokawa) was Yawata Nashi (pears harvested in Yawata area in Ichikawa) that Sir. Zenroku Kawakami in Yawata began to plant pears in 1770.
According to Genko no Bonsho Bell, there were a sea in front of Katsushika Hachimangu Shrine, so Yawata was not adequate for farming as it was sandy place and the farmers were impoverished.
January 1742, Zenroku Kawakami was born in Yawata. Zenroku thought and thought what kind of products would be adequate for the land. One day, he found that pears could grow in the sandy place, and he began raising pears in Yawata, but it did not work well. Then Zenroku went to Mino (Gifu prefecture) to study how to raise pears as the production of pears was prosperous there at that time and he brought some good grafts to Yawata and he coulld raise them in Katsushika Hachimangu Shrine successfully. After that, Zenroku tried to produce a new variety of pears and he could success raising a good species of pear. Zenroku recommended neighbors to cultivate pears and sold them as Yawata Nashi (pears in Yawata). Several years had passed, Yawata Nashi became very popular in Edo and neighbor areas among Edo. In Edo Meisho Zue (a guide book describing Edo) described pears growing in Yawata.
Now there are few pear farms in Yawata, but they have spread out around the area and Ichikawa City and cities among Tokatsu area become the major pear production areas. Yawata Nashi is now called 'Ichikawa Nashi' that is one of the special products in Ichikawa city and popular among Japan.
Zenroku Kawakami was rewarded by a local adminstrator in Yawata as his filital piety to his parents and his contribution to the pear growing. Moreover, he had a psewdonym named Mokei so to say he was known as an intellectual. Sir. Zenroku Kawakami was passed away in August 1829. In 1915, the stone monument for praising the great contributions of Sir. Zenroku Kawakami was built in Katsushika Hachimangu Shrine. Now it stands to tell us his excellent works.
page top

The Building of the Central Public Hall in Ichikawa City

The Building of the Central Public Hall in Ichikawa City
There is an old Japanese style building having a hipped gable like an onsen inn in local areas in Japan on the way back from the main shrine of Katsushika Hachimangu Shrine, it is the central public hall of Ichikawa City. According to the web site of Ichikawa City, the building was the mansion of Koguma moved from Okubo, Kashiwazaki city, Niigata prefecture in 1951, and completely rebuilt and opened in May 5th in 1952. The Koguma Family succeeded the village headman during Edo period. This building was built in 1868 by Rokuro Koguma who was the first prefectural governor in Niigata prefecture. The mansion was built with high quality wooden materials on the wide hill top. The Emperor Meiji visited it and slept in its large hall when his tour to Hokuriku Regions written on the stone statue scribing Imperial Tour to Hokuriku Region of the Emperor at Onodate Koen Park in Kashiwazaki Kaigan Shore. The Prince Tokudaiji and Aritomo Yamagata contributed Meiji Government visited this mansion after that. The building became so old that it was rebuilt in 1990. The entrance and lobby remain the original style.
This wonderful Japanese style building seems to merge into the approach to Katsushika Hachimangu Shrine.

The Map to Katsushika Hachimangu

PDF of the Map to Katsushika Hachimangu