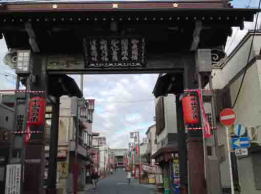 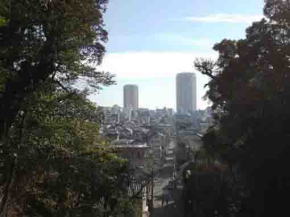 Shiki Masaoka, one of the greatest haiku and tanka poet in Meiji Era visited several times in this area introduced in this web site. It would be related that he was the teacher of Sachio Ito, a famous writer from Shimousa, or the new railway from Honjo in Tokyo to Sakura in Shimousa opened in 1894, and his friend Kyoshi Takahama said in his book that he had loved Nichiren Shiki visited Nakayama Hokekyoji Temple, Katsushika Hachimangu Shrine, Yawata no Yabushirazu, Mamasan Guhoji Temple and Funabashi Daijingu Shrine.
His trips in Shimousa recorded in his works. Shiki Masaoka wrote haiku poems and a Chinese poem of Konodai area on the eastern side of Edogawa River. 'Ishi kubomu shogi no ato ya koke no hana' and 'Heiei ya shimo ni aretaru konodai'. These poems describe the views in it in his ages.
In his ages, there were few tall buildings, Shiki Masaoka described several steaks of smoke from salt industry along the shore of Tokyo Bay. He wrote that he ate a meal and bought a sugegasa hat at Ichikawa after the train had paste the river. His works describing them showed a lot about people in Shimousa in Meiji Era.
Several noted spots where Shiki Masaoka visited and wrote of are introduced in this page. Why don't you visit them?

Shike visited it and called it Yawata no Yashiro.

Shike saw it and described about 'Yabu'.

The observatory in this building is in Ichikawa Station.

Shiki visited and wrote haiku poems of the temple.

The legendary beauty Tekona is dedicated this temple.

This bridge has been introduced in many poems for 1000 years.

Tekona dove into Mama no I well in this temple.
page top
Let's Go On A Walk In Nakayama Shimousa Top Page
The Landmarks with Artists and Poets Top Page