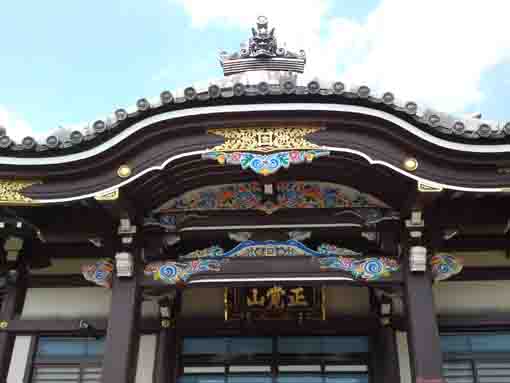 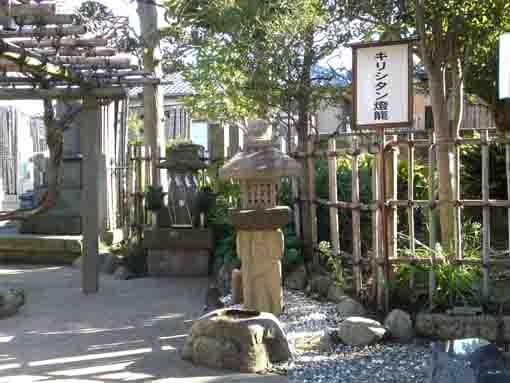 Shokakusan Myokakuji Temple has two gates opening to Gongenmichi Road and Takumibori. Myokakuji Temple is a branch temple of Nakayama Hokekyoji Temple and it dedicates the statue of Nichren as its principle image. Moreover, the temple has a garden lantern called Kirishitan Toro (Christian Lantern). In General, the image of Christian in Japan before Meiji Restoration is that it had been believed in Kyushu (southwest Japan) secretly, so this kind of lantern is seldom found in eastern Japan, especially there is no Kirishitan Toros in Chiba prefecture anymore. And it is said that it was designed by Oribe Furuta who was a sengoku busho (a famous samurai worrier) and a master of the tea ceremony in Sengoku Period (the warring state period), then, some call it Oribe Toro.
The main hall of Shokakusan Myokakuji Temple is very beautiful and the trees in the garden is well trimmed, so it is the excitingly wonderful temple to visit and it is also on the center of the course to walk in Gongenmichi Road and Teramachidori Street.
Why don't you visit Shokakusan Myokakuji Temple?
このページの先頭へ

There is a remain of the beliefs in Christanity in Myokakuji Temple. It is a garden lantern called Kirishitan Toro and it is also very rare in eastern Japan, so there are any other lanterns in Boso Peninsula (Chiba prefecture). There is a father of Christian with a mantle and shoes carved in the lower part of it. (The shoes are now buried in the earth) Moreover, it is said that this type of lantern was designed Oribe Furuta, a samurai worrier and a sengoku daimyo famous for a master of tea ceremony, so the lanterns are also called Oribe Toro.

PDF of the Map of the landmarks in Gyotoku Teramachi Areas
.