a walk on mito Komon 水戸黄門こと徳川光圀ゆかりの散歩道

A Walk on the Noted Spots Connecting with Mito Komon 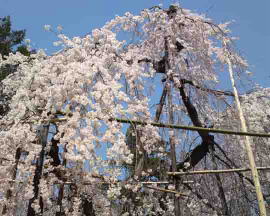 The area around Mamasan Guhoji Temple was a popular sightseeing area in Edo period. And Tekona Reishindo Hall and Mama no I well are the noted spots of Tekona, the beauty in the Myriad Leaves and Mamasan was the famous noted spot of viewing for cherry blossoms in spring and colored leaves in fall. These landmarks were introduced in Edo Meisho Zue (a guide book of Edo published in Edo period) and Meisho Edo Hyakkei (Ukiyoe pictures of 100 spots in Edo by Hiroshige). Moreover, the small bamboo wood called Yawata no Yabushirazu having some mysterious stories and Katsushika Hachimangu Shrine deeply believed by many samurai worriers in Kanto are also famous spots introduced in the guide book.
Mitsukuni Tokugawa, sometimes he was called Mito Komon, loved studying, it is famous that he edited 'Dainipponshi (Japanese history book)'. He might visit Mamasan and Yawata on his way to his hometown Mito from Edo. He named a tea room a Mamasan Guhoji Temple donated by Dokan Ota 'Henrantei', and he enjoyed seeing cherry blossoms in the temple. And it was a very famous story that Mito Komon had got lost in a bamboo wood called Yawata no Yabushirasu. This story is introduced in 'Ichikawa no Mukashibanashi (the old tales in Ichikawa City)'.
About in the early Edo period, Mito Komon might take a boat on at Nihonbashi, it would pass hrough Onagigawa, Shinkawa and Shin Tone river now called Edogawa river, then he might land on at Mama no Irie cove.
Some noted spots connected with Mito Komon are on this page. Why don't you visit them?
page top

A Tea Room 'Henrantei' was named by Mito Komon and he enjoyed seeing cherry blossoms.

It is said that Mito Komon had got lost in this bamboo wood called Yawata no Yabushirazu.

Mito Komon might visited Yawata no Hachimansama when he got lost in Yawata no Yabushirazu.

This temple has a portrait of Nichiren drawn by Mito Komon.
page top

The Locations of the Landmarks Connecting to Mito Komon