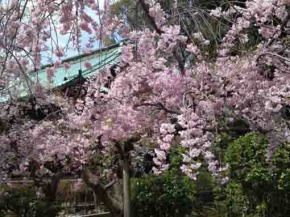 Nakayama Hokekyoji Temple has several National Properties and Important Cultural Properties Designated by the National Government in it and it also has many other cultural properties in it. Walking up the approach road to the temple from Shimousa Nakayama Station or Keisei Nakayama Station, there is the Niomon Gate on the top of the slope and it has a framed letters '正中山’ hanged on the gate was written by Koetsu Honami, the famous artist in Sengoku period and he was counted as one of the three greatest carigraphers in Edo period. Hokkedo Hall has his framed letters '妙法花経寺' in it and Soshido Hall has '祖師堂' on it. And there is his family's and his grave that was buried part of their ashes in Nakayama Hokekyoji Temple. Moreover, the five-story pagoda in this temple was built to pray for the parents' souls of Koshitsu Honami, a son of Koetsu's sister and his successor with great support of Toshimitsu Maeda, the third lord of Maeda Family in Kaga Province (Ishikawa Prefecture).
There are many cultural properties from Muromachi to Edo period in Nakayama Hokekyoji Temple including Hokkedo Hall, Yonsokumon Gate, Soshido Hall and Gojunoto (the five-story pagoda). The framed letters by Koetsu Honami are the examples of them in this temple.
In this page, the noted spots hanging on the framed letters by Koetsu Honami are introduced. Why don't you see them?
このページの先頭へ

There are several calligraphies written by Koets in this temple.

The framed letters hanged on the gate written by Koetsu.

The framed letters hanged in the hall written by Koetsu.

The framed letters hanged on the hall written by Koetsu.
page top
Let's Go On A Walk In Nakayama Shimousa Top Page
The Landmarks with Artists and Poets Top Page